The Top Gun Volleyball Scene Is Not Homoerotic. It Is Homosexual. 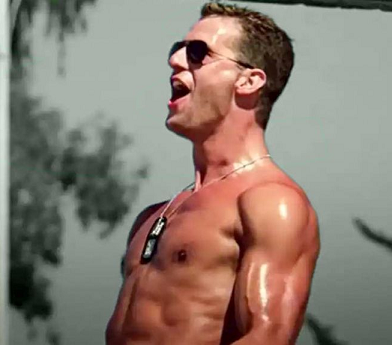 To have watched all of this unfold, on the big screen, right in the middle of puberty, was simply not fair.

This weekend sees the release of Top Gun: Maverick, the long-awaited follow-up to the 1986 blockbuster, and while the movie did not necessarily need (the need for speed!) a sequel, I am ready. The original Top Gun is about a bunch of people who know how to fly very sophisticated fighter jets but have not yet determined that they can wipe sweat off their own faces with even ordinary paper towels. Top Gun blew all the hell up in the summer of ’86 for a variety of reasons: the Reagan-era jingoism, Kenny Loggins’ “Danger Zone,” the absolute incandescence of a young Tom Cruise. It was a big, sweaty phenomenon.

But Top Gun holds an entirely separate place in some of our hearts. A few of us walked into that multiplex and found ourselves excited in ways our peers may not have been. Some of us witnessed a moment that stayed in our hearts forever.

I speak, of course, of the beach volleyball scene, a one minute and forty second sequence in which a shirtless Tom Cruise, Val Kilmer, and Rick Rossovich (plus a wisely shirtful Anthony Edwards) face off in a high-stakes pickup game to the sound of Kenny Loggins’ “Playing With The Boys.” My brother, ten years older, married with four kids now, took me to see Top Gun in the summer of 1986. We left the theater exhilarated. “Man,” he said, “they oughta have a recruitment table outside the theater.” “They really should,” I said, knowing down deep we were talking about very different recruitment tables.

If you were a certain kind of teenage boy in 1986, the beach volleyball scene in Top Gun spoke directly to you. And what it said was: “You’re gay now. Good luck.”