A huge Atlantic ocean current is slowing down. If it collapses, La Niña could become the norm for Australia 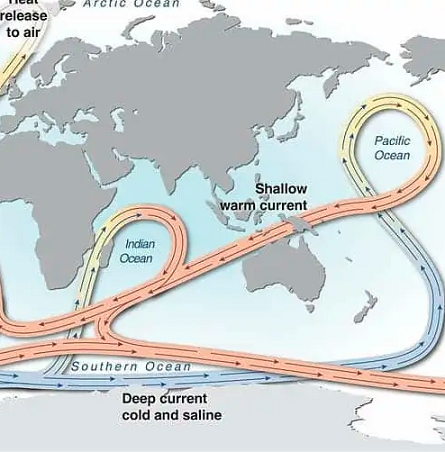 Australia, much like the rest of the world, is vulnerable to climate change in ways that are not always evident.

Climate change is slowing down the conveyor belt of ocean currents that brings warm water from the tropics up to the North Atlantic. Our research, published today in Nature Climate Change, looks at the profound consequences to global climate if this Atlantic conveyor collapses entirely.

We found the collapse of this system – called the Atlantic meridional overturning circulation – would shift the Earth’s climate to a more La Niña-like state. This would mean more flooding rains over eastern Australia and worse droughts and bushfire seasons over southwest United States.

East-coast Australians know what unrelenting La Niña feels like. Climate change has loaded our atmosphere with moister air, while two summers of La Niña warmed the ocean north of Australia. Both contributed to some of the wettest conditions ever experienced, with record-breaking floods in New South Wales and Queensland.

Meanwhile, over the southwest of North America, a record drought and severe bushfires have put a huge strain on emergency services and agriculture, with the 2021 fires alone estimated to have cost at least US$70 billion.

Earth’s climate is dynamic, variable, and ever-changing. But our current trajectory of unabated greenhouse gas emissions is giving the whole system a giant kick that’ll have uncertain consequences – consequences that’ll rewrite our textbook description of the planet’s ocean circulation and its impact.

What is the Atlantic overturning meridional circulation?

The Atlantic overturning circulation comprises a massive flow of warm tropical water to the North Atlantic that helps keep European climate mild, while allowing the tropics a chance to lose excess heat. An equivalent overturning of Antarctic waters can be found in the Southern Hemisphere.

Climate records reaching back 120,000 years reveal the Atlantic overturning circulation has switched off, or dramatically slowed, during ice ages. It switches on and placates European climate during so-called “interglacial periods”, when the Earth’s climate is warmer.

Since human civilisation began around 5,000 years ago, the Atlantic overturning has been relatively stable. But over the past few decades a slowdown has been detected, and this has scientists worried.