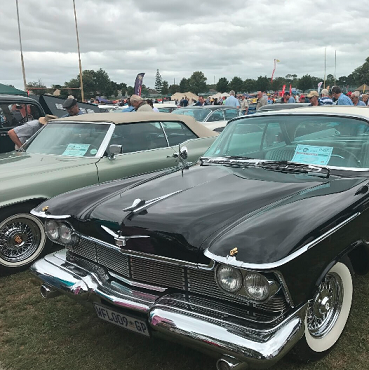 The Classic Car Show at Nasrec Expo Centre on Sunday July 3 is set to host the biggest muscle car display in the country in 2022.

Excitement is at fever pitch, due to the fact that lock-down regulations caused the cancellation of this event deep in Muscle Car territory since 2019.

“We have had mega interest from the muscle car builders,” says organiser Paulo Calisto, who has been the chief mover and shaker behind previous renditions of The Classic Car Show for over a decade.

“I am expecting to see a number of beautiful Mustangs, Camaros, Dodge Chargers and Mercury Cougars that have been in the build-up stage for the past few years. Traditionally, many custom car builders use The Classic Car Show to unveil their latest creations, which adds to the festivity of the event. And, of course, all our traditional muscle car exhibitors will be out in full force, after such a long break. They can’t wait to give their favourite toys a bit of fresh air!”

In addition to hundreds of muscle cars, classics and vintage cars, the motorcycle club, 45s MC, South Africa, is going to be hosting a huge run to the show on their two wheelers, to raise funds for charity and collect blankets for the needy who are suffering during the cold winter months.

Calisto has re-vamped the format of the show for July 3. For the first time, all the classics and muscle cars will be displayed in the area surrounding Gate 5, while the fields accessed from Gate 2 will now be for the exclusive “Germany versus Japan” display which had grown huge in numbers at past shows at the vast Nasrec facility.

“The main reason for this is to provide much better traffic flow for both spectators and people exhibiting their cars. Now we will direct classics and muscle cars to the south-east side of the venue, using Rand Show Road as the feeder. The Japan versus Germany young-timer classics will enter at the traditional Gate 2, which is on the west side of the facility, closer to the soccer stadium.

“Of course, as before, spectators will have access to both of these shows-within-a-show. And separate, secure parking will be available for spectators driving ordinary modern cars, with easy access to the show.”

The whole Muscle Car Revolution had its roots in April 1964 with the launch of the original Ford Mustang in America. A number of the classic first-generation Mustangs are expected, and this first-gen car is considered by many to be the purest rendition of the muscle car movement, or, as many people call them, “pony cars”.

Chevrolet, operating under the General Motors flag, was caught napping by the huge success of the Mustang, but launched a very similar car, the Chevrolet Camaro, in 1967. Other American makes followed , and cars like the Pontiac Firebird, the Dodge Charger and Challenger models, and the Plymouth Barracuda all added to the mix, which was basically a small (by American standards) two door body, light by comparison to the very large American cars of the time, fitted with huge V8 engines to provide gut-tightening performance.

The late 1960s and early 1970s saw engines in these cars growing more and more powerful. Texan Carroll Shelby, famous for his Cobra sports cars, hopped on the pony-car bandwagon to introduce super-powerful Shelby Mustangs to the world at large. Indeed, Shelby Mustangs are still being produced today, while modern versions of Mustangs and Camaros still race in the famous Nascar racing series in America.

Despite never being offered here for general sale to the public in South Africa, (except in very limited batches by the likes of Ford Motor Company in the mid-1960s), it is amazing how many American muscle cars were imported to South Africa by private individuals in those days.

By the end of 1973, the great fuel crises led by an Arab embargo on oil sales world-wide, pretty much signalled the end of the golden age of performance in America – or at least for a few decades. And in South Africa too, performance was out, and fuel economy became the main focus. But in the 1990s muscle cars started making a comeback and they are still being produced in America today, with modern fuel-injected and supercharged V8s that give them astounding performance.

While the 1964/65 Mustang gave huge impetus to the muscle car movement, older enthusiasts remain convinced that the muscle car movement actually had its roots in the 1950s, when Ford, General Motors and Chrysler all started fitting super-powerful V8s into full-sized American sedans. The Chevrolet Impalas, Ford Galaxies and full-sized Dodges and Plymouths of this era were available with V8 engines up to 7,0 litres in size, and these giant, wallowing, fin-bedecked cars, in special versions, often found their way here to South Africa, offering close to 200 km/h performance, in an era, when the average family car battled to maintain 110 km/h flat out!

But there were many interesting makes of cars on sale here, quite apart from the big American machines, and at Nasrec on Sunday, July 3, you should expect to see many classic British Fords, Minis, and German-designed Volkswagens from the late 1950s through to the early 1970s. Sports cars, too were popular, in the form of MGs, Triumphs, and Italian makes such as Alfa Romeo, and yes, even the super-exotics like Ferraris, Maseratis and Lamborghinis (this last make only made its international debut from the mid-1960s onwards).

As for the Germany versus Japan display, the accent is going to be very much on hot Golfs, Honda Civics, Toyota RSis and the like, many fitted with huge turbochargers, lowered suspensions and booming sound systems. Souped-up BMWs, Audis, Mercedes-Benzs and Opels also form a big part of this movement. The hot Volkswagen cult is huge in the suburban areas surrounding Nasrec, especially in the form of Citi Golfs with clean custom looks, tasty wheels, and suspension systems that give a much more menacing look than the manufacturers ever intended.

As ever, The Classic Car Show will provide entertainment for the whole family, with a flea market, drifting displays on the Nasrec skidpan and affordable helicopter rides, as well as good food and drink on sale, and live music entertainment.

* All drivers of genuine classic cars and one passenger admitted free of charge.

PrevPreviousThe Best Gayborhoods in Florida’s Major Cities
NextA huge Atlantic ocean current is slowing down. If it collapses, La Niña could become the norm for AustraliaNext