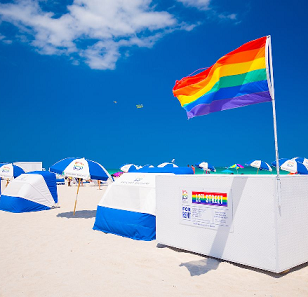 Let’s get one thing straight — Florida is not.

Considering the state’s anti-LGBTQ history, this might come as a shock. In the 1950s and 60s, the Florida Legislative Investigation Committee attempted to eliminate LGBTQ people from schools by demonizing gay teachers and upending their careers. Anita Bryant’s anti-gay campaign in the 1970s led to a repeal of Florida’s non-discrimination ordinance, causing a disastrous ripple effect around the US. Most recently, Governor Ron DeSantis signed the “Don’t Say Gay” bill to restrict the discussion of sexuality and gender identity in public schools — an act of social-emotional terrorism against children and educators alike.

But antiquated ideology and hateful legislation can’t snuff out reality. Unless Florida falls into the ocean, LGBTQ folks aren’t going anywhere. Join the Sunshine State’s queer community by screaming “gay” from the ROY-G-BIV rooftops of these five rainbow-riffic destinations.

PrevPreviousAsexuality and LGBTQ+ Activism in Taiwan
NextHuge Muscle Car display expected for The Classic Car Show on July 3, 2022Next