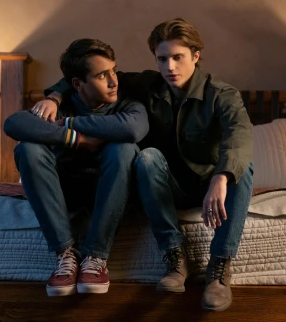 ‘No one should be forced to come out’

Love, Victor stars Michael Cimino and George Sear have shared how they feel regarding the pressure actors can feel to disclose their sexuality, emphasising that ‘forcing someone to come out’ is ‘the biggest no-no in the LGBT community’.

This week, season 3 of their heartwarming, joyous show drops on Hulu in the US and Disney Plus in the UK, with the latest episodes following the lead character Victor (Michael) as he navigates a complex love triangle, having come out as gay to his family in the season 1 finale.

Kit Connor, who plays Nick in the widely acclaimed LGBT+ series Heartstopper, recently spoke out about why he doesn’t feel he needs to label his sexuality, after writing on Twitter in response to some fans who speculated on his sexual orientation: ‘Twitter is so funny man. apparently some people on here know my sexuality better than I do…’

While speaking to Metro.co.uk, Michael and George – who plays Victor’s boyfriend Benji on Love, Victor – were asked how they feel about that discussion.

Referencing Kit, who’s 18, the English actor continued: ‘For all we know, he could still be figuring himself out. It’s totally his business, that’s totally up to him, whether to talk about that or not, and I think that’s what it comes down to, is whether people want to or not, really. But you know, it’s part of a big conversation.’