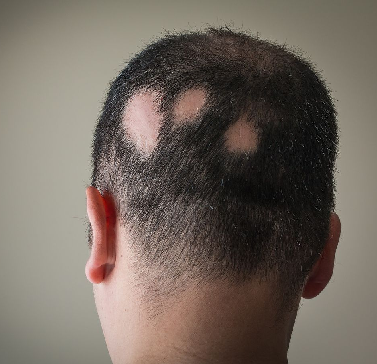 Despite the vast impact of alopecia areata, this is the first systemic treatment ever approved by the FDA.

A first-of-its-kind alopecia drug has just been approved by the US Food and Drug Administration (FDA), offering fresh hope for the millions of people in the US who experience severe hair loss as a result of the autoimmune condition.

The once-a-day pill, known as baricitinib (sold under the brand name Olumiant), is used to treat severe alopecia areata, an autoimmune condition that attacks the body’s own hair follicles, resulting in patchy hair loss. The drug works by inhibiting the action of specific enzymes that are involved in a pathway that leads to inflammation.

The FDA granted the approval of Olumiant to pharmaceutical giant Eli Lilly after a couple of promising clinical trials showed that it helped a significant number of people with severe alopecia areata to regrow their hair.

Some mild side effects were noted in the trials – including upper respiratory tract infections, headache, acne, and high cholesterol – but the treatment was ultimately deemed safe and effective.

It’s estimated that over 6.8 million people living in the US have alopecia areata. It can affect people of all ages, sexes, and all ethnic groups. While the condition has few physically harmful effects, it’s known to have a profound impact on some people’s mental wellbeing, having strong links to a higher risk of anxiety and depression.

Despite the huge toll the condition can have, this is the first drug to treat alopecia areata that’s ever been approved by the FDA.

PrevPreviousVWSA makes massive strides in environmental sustainability initiatives
NextGoogle says its AI chatbot system LaMDA is not sentient. But how do they know?Next