Russia: A State of Homophobia 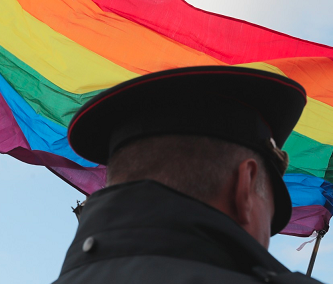 The position of LGBT people in Russia was bad before the war started and has worsened since then.

2022 marks the 10-year anniversary of Vladimir Putin’s first legislative attack on citizens based on their sexual orientation. This law, which prohibits “propaganda of homosexuality and pedophilia among minors”, was adopted in March 2012 and covered the city of St. Petersburg. The following year, a similar ban went into effect throughout the rest of the country.

Immediately after the adoption of the federal law, “On the prohibition of propaganda of non-traditional sexual relations among minors,” sociologist Alexei Levinson noted that it encroaches on “the freedom of all people to express their opinions in public space.” Since then, as human rights activists note, the persecution of LGBT people in Russia has increased every year, mirroring the growth of aggressive homophobic propaganda.

In December 2014, Human Rights Watch published a report on the persecution of the LGBT community in Russia. According to activists, after the introduction of the law in 2013, “there has been an increase in the number of attacks on LGBT people throughout Russia, both by individuals and by organized homophobic groups. In addition, attacks on LGBT rights defenders have increased.” Activists reported campaigns of harassment and intimidation of LGBT teachers, human rights defenders, and most importantly, the total inaction of law enforcement agencies in response to acts of violence.

At the same time, a well-known LGBT activist, a political refugee from Russia, and head of the RUSA LGBT DC emigrant organization, Gleb Latnik, in an interview with this author, noted that those targeted by this law were rarely persecuted purely for their sexual orientation. Many were simply politicized by the government’s attack on their free existence.

“When this law was introduced, I immediately realized that its main goal is not so much to fight against homosexual people, but to create in society an image of an enemy that is convenient for propaganda,” Latnik said. “Against the backdrop of such discrimination, LGBT people began to see themselves as a separate community, and many of its representatives at that moment took an active political position for the first time. It was this position that became the reason for the repression against activists.”