Feminist and LGBT Rights Activist on Trial in Russia 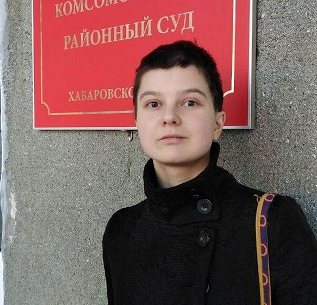 The activist from Komsomolsk-on-Amur, in Russia’s Far East, promotes women’s rights, and the rights of lesbian, gay, bisexual and transgender (LGBT) people in Russia. The charges against Yulia are connected to the public group she administered on social media to share body positive artwork depicting female anatomy.

During the 31 months investigation and trial, authorities raided Tsvetkova’s flat, kept her under house arrest for four months, issued administrative fines, and considered opening another criminal case against her. Authorities detained and fined numerous activists, including feminist activists, who picketed in solidarity with Tsvetkova. The verdict is expected in July.

On June 3, the Justice Ministry added Tsvetkova to the list of “foreign agents,” a toxic label authorities use to harass and penalize critics. The prosecutor asked the court to add this to her “personal characteristics” in her case file.

The charges against Tsvetkova have no legal basis. It took law enforcement four attempts to get the prosecutor to approve the indictment against her.

The case against Tsvetkvoa is a blatant violation of freedom of expression protected under international law. If convicted, she will no longer be able to appeal to the European Court of Human Rights to contest the injustice, as Russia spirals into isolation amid its war on Ukraine.

On the same day of Tsvetkova’s trial, the European Court of Human Rights ruled Russia’s repressive “foreign agents” law to violate freedom of association. Russian authorities stated they would not comply with the court’s rulings following Russia’s rushed withdrawal from the European Convention on Human Rights.