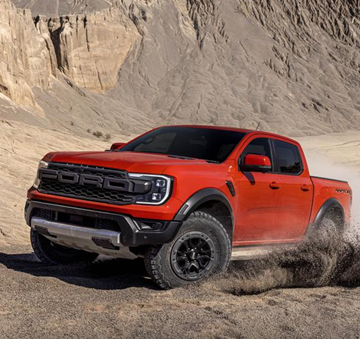 The next-generation Ford Ranger Raptor raises the off-road performance bar and is the ultimate performance with smarter technology and hardware.

The Ranger Raptor’s anti-lag system keeps the turbochargers spinning for up to three seconds after the driver backs off the throttle, allowing for faster resumption of acceleration out of corners or between gears when the driver gets back on the accelerator.

A 10-speed automatic transmission works well on gravel, dirt, mud and sand. Drivers can even amplify the engine note in four modes from tame to wild.

Some modifications and reinforcements ensure that the butch looking raptor can take the punch in tough off-road conditions.

The running gear has to match the power so the suspension have been completely redesigned for various conditions from high speed to rough terrain.

Soaking up those humps and bumps are next-generation FOX 2.5-inch Live Valve Internal Bypass shock absorbers with cutting-edge control technology offering position-sensitive damping capability. These shock absorbers are the most sophisticated yet on Ranger Raptor and are filled with Teflon™-infused oil that reduces friction by around 50 percent compared to those on the current Ranger Raptor.

While the hardware is FOX, the tuning and development work was carried out by Ford Performance using a mixture of computer-aided engineering (CAE) and real-world testing.

In addition to working with the drive modes, the system works in the background to prepare the Ranger Raptor for different conditions. As the shocks compress, different zones within the bypass system give exactly the amount of support needed for the travel being used and work in reverse as the shocks rebound back to full height.

Serious underbody protection is almost double the size of the standard Ranger bash plate and made from 2,3mm-thick high-strength steel.

Next-gen Ranger Raptor also comes with Trail Control™, which is like cruise control for off-roading. The driver simply selects a set speed (less than 32km/h), and the vehicle manages acceleration and braking while the driver concentrates on steering through difficult terrain.

I loved the orange accents on the instrument panel, trim and seats which echo the amber ambient lighting and the superb Apple and Android wireless smartphone connectivity. A Bang & Olufsen sound system was more than I asked for but such small luxuries are always welcome. adventure.