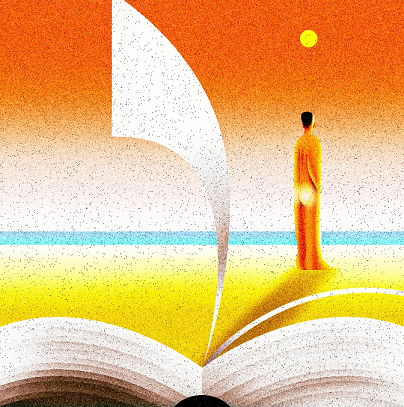 “The Kingdom of Sand” portrays one man’s existence in the wake of the AIDS crisis and personal tragedy.

In 1978, two novels appeared that covered remarkably similar, and largely unexplored, territory, documenting the drug-addled, sex-crazed circuit of bathhouses, dance clubs, and parties that, in the seventies, shuttled gay men between Manhattan and Fire Island, with occasional forays to San Francisco or the more exotic wilds of Brooklyn and Queens. In both books, men searching for love settle for ever more elaborate sexual scenes—floggings, fistings, crucifixions—and, in both, men throw away their lives: diving from heights on angel dust, sniffing poppers at the bottom of swimming pools, leaping, “like roaches falling from a hot oven,” out of upper-floor windows at the Everard Baths, where a fire killed nine men in 1977. Both novels are, finally, morality tales, critiquing a life style that they see as empty, immature, dangerous, doomed; both would later be hailed as prescient from the perspective of communities ravaged by AIDS.

And yet the experience of reading the books could hardly be more different. Larry Kramer’s “Faggots” is a manic picaresque, radiating disgust in sentences that are as crazy with jitters as any of the strung-out queens he depicts. Andrew Holleran’s “Dancer from the Dance,” by contrast, is bathed in melancholy gorgeousness, as attuned as any of its characters to “the animal bliss of being alive.” The book is so vivid in its portrayal of lives devoted to pleasure that Holleran has sometimes been charged with glorifying hedonism, or with suggesting that the world he writes about is the only one possible for gay men. In fact, the novel is clear from the start that its subject is “that tiny subspecies of homosexual, the doomed queen, who puts the car in gear and drives right off the cliff!”

“Dancer” is beloved not only for the beauty of its sentences but for the brilliance of one of its central characters. Andrew Sutherland, an erudite, speed-addicted, endlessly lovable Wildean queen, who teaches the book’s protagonist the ins and outs of queer life, counts among the glories of postwar American fiction. In a novel characterized by twilit languor and ambered nostalgia—Holleran’s clearest influences are Fitzgerald and Proust—Sutherland blazes in hilarious scenes that have remained etched in my memory since I first read the book, as an adolescent. In one, Sutherland interrupts his reading of St. Teresa to lean out a window and impersonate an Italian prostitute; in another, he halts a gay man’s maudlin monologue with what still seems to me an excellent remedy for homosexual self-loathing: “For heaven’s sake, don’t take it so seriously! Just repeat after me: ‘My face seats five, my honeypot’s on fire.’ ”

AIDS put an end to the world that the books chronicled. Kramer met the occasion with extraordinary energy: he helped to found Gay Men’s Health Crisis and ACT UP, and his play “The Normal Heart,” first staged in 1985, is one of the era’s enduring works. Holleran, by his own account, was enervated, even paralyzed, and came to question the value of art in the face of overwhelming tragedy. His second novel, “Nights in Aruba,” appeared in 1983, as the scope of the epidemic was just becoming clear, and it refers to AIDS only glancingly; another thirteen years passed before he published his third. His literary efforts in the eighties were directed toward essays for the gay magazine Christopher Street; they form a real-time account of the early AIDS crisis. A selection of these pieces, gathered in the 1988 volume “Ground Zero,” is one of the most important books to emerge from the plague.

AIDS wasn’t the only catastrophe that Holleran confronted. Also in 1983, when he was thirty-nine, his mother broke her neck in a fall and became a quadriplegic. “At times he has to remind himself, She fell, I didn’t,” Holleran would write in “The Beauty of Men,” his third novel. “But it doesn’t matter. She fell on him.” He cared for her for more than a decade, living in his parents’ home, in a small town in northern Florida; his growing alienation from New York City on return visits is a theme of “Ground Zero.” Holleran, who never came out to his parents, kept his family life and his gay life separate. (Andrew Holleran is a pen name, taken to protect his family; his real name is Eric Garber.) The bifurcation of his life, and the experience of “two parallel disasters occurring in the separate compartments,” is the primary preoccupation of his fiction after “Dancer.”

That début remains uniquely novelistic among Holleran’s works. His subsequent books, from “Nights in Aruba” to his new novel, “The Kingdom of Sand,” can most profitably be read as a sustained study of one man’s life. Though the protagonists are sometimes granted different names—Paul in “Nights in Aruba,” Lark in “The Beauty of Men”—and minor differences of circumstance, the major facts of their biographies are largely constant, and shared with their author: a devout Catholic childhood on a Caribbean island; military service and initiation into gay life in Heidelberg; young adulthood in New York, where the thrill of sexual freedom competed with anxiety about possibly wasting one’s life; then a mostly closeted small-town existence, caring for a disabled parent, and crushing grief after that parent’s death. Incidents, scenes, even lines of dialogue drift between the books, and certain events take on a totemic force: a roommate’s suicide; a father calling out after suffering a stroke; a mother asking her adult son if he is gay and the son’s panicked denial.

The protagonist’s mother is the most vivid presence in these books. In “Nights in Aruba,” she is a bored, imperious, heavily drinking housewife, who insists that her young son stay with her while she finishes a final drink. “You don’t love me,” she accuses the boy—one of many instances of mild, commonplace, devastating abuse. And yet he recognizes her, even in this early novel, as “the last faithful love I would have.”

His faithfulness never falters. The most moving passages of “The Beauty of Men” take place when Lark visits his mother in her nursing home. “You’ll never leave me. Your conscience won’t let you,” she tells him, a line that first appears in “Beauty” and returns, in memory, in “The Kingdom of Sand.” They watch “Murder, She Wrote” and “Jeopardy!” together; he pushes her wheelchair around the facility, or to a nearby mall. “He feels like Jesus, raising Lazarus from the dead,” Holleran writes. “It is worth everything else . . . that single, brief moment when he first swims into her vision and she awakens like a flower in some speeded-up film, blossoming before his very eyes.”