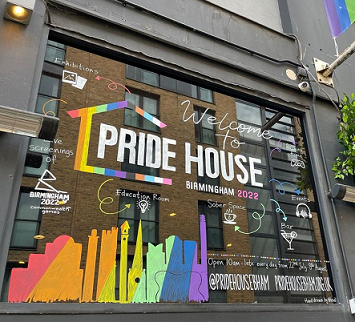 Pride House Birmingham are looking to change attitudes among the 35 countries participating in the Commonwealth Games that continue to persecute the LGBT+ community.

Tom Daley’s historic entrance to the Commonwealth Games opening ceremony is being used to drive the conversation around improving equality for the LGBT+ community in the participating countries.

Based in the heart of Birmingham’s Gay Village, Pride House offers a safe space for members of the LGBT+ community visiting the region for the Games, as well as hosting screenings of the events and educational talks from leading LGBT+ activists and athletes. The Birmingham Pride House is also the first to have a presence in the Athletes’ Villages, something that co-organiser Jon Holmes believes will be crucial to starting conversations around improving the situation of the LGBT+ community across the Commonwealth.

“It’s just such an important project. The Commonwealth Games is such a pivotal event to have these conversations at. We’re trying to talk responsibility as a country for the fact that we imposed all these penal codes and anti-LGBT laws on these countries when we colonised them,” he told Mirror Sport.

“It feels like there’s a responsibility to us to be leading the conversation. We can’t be expected to pressure governments to change their laws, but we want to work with activists on the ground and support them in their efforts because the change has to come from within.

“It’s even more important because of the Covid restrictions that we’re still under in the sense of having protocols and the athletes trying to keep themselves safe. We have to be realistic now and know that a lot of athletes who are LGBT+ won’t get the opportunity to necessarily come here to the House.