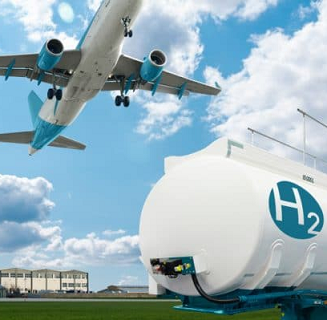 South African company Sasol ecoFT, the subsidiary of chemical giant Sasol, is launching a joint venture with Swedish energy company Uniper. The objective of this partnership is the production of sustainable aviation fuel based on green hydrogen.

Reducing greenhouse gas (GHG) emissions from air transport. This is the new mission of Sasol ecoFT. The subsidiary of the South African chemical giant Sasol has signed a partnership with the Swedish energy company Uniper. The two partners have decided to launch SkyFuelH2. The joint venture will produce sustainable aviation fuel.

Every year, civil aviation emits nearly 3% of the world’s CO2 emissions. According to Planetoscope, a platform that measures the essential orders of magnitude of sustainable development and ecology, nearly 660 million tons of CO2 are emitted by airplanes each year. The joint venture will build a plant for the production of hydrogen-based aviation fuel obtained from renewable energies.

The use of carbon

The production of sustainable aviation fuel will also be based on carbon obtained from biomass using the Fischer-Tropsch process developed by Sasol. The plant will be built in Långsele. According to Sasol, this location near the Swedish city of Sollefteå was chosen because of the municipality’s ambitious growth targets and its supply of renewable electricity, biomass carbon and suitable land.

“By using green hydrogen and sustainable carbon sources as feedstock in our proprietary Power-to-Liquids (PtL) process, we can now produce sustainable fuels, contributing to the prosperity of the planet, our group and our businesses,” says Fleetwood Grobler, Sasol’s CEO.

By investing in sustainable aviation fuel, the South African chemical giant is also confirming its commitment to new energy. The company, which claims 30,100 employees, wants to produce green hydrogen on site in South Africa. Under a partnership with the Northern Cape Development Agency (NCEDA), Sasol wants to set up its first plant in the Namakwa Special Economic Zone (SEZ).