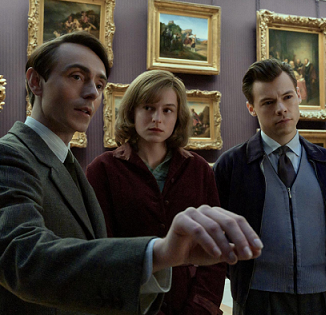 “It’s not like ‘This is a gay story about these guys being gay,'” Styles said. “It’s about love and about wasted time to me.”

Harry Styles is proud to be a part of showing the “tenderness” of gay sex.

The Grammy winner stars opposite Emma Corrin in “My Policeman,” a 1957-set period piece about a love triangle between a closeted cop (Styles), his wife (Corrin), and a museum curator (David Dawson).

“It’s obviously pretty unfathomable now to think, ‘Oh, you couldn’t be gay. That was illegal,’” Styles told Rolling Stone of leading the film. “I think everyone, including myself, has your own journey with figuring out sexuality and getting more comfortable with it. It’s not like ‘This is a gay story about these guys being gay.’ It’s about love and about wasted time to me.”

Based on Bethan Roberts’ 2012 novel of the same name, “My Policeman” is helmed by “Genius” director Michael Grandage and is set for a TIFF premiere before debuting in theaters October 21, followed by a Prime Video streaming launch November 4.