The awkward reality of the far-right becoming diverse 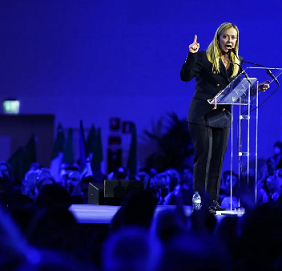 It’s not so easy to paint conservatives as bigoted any more.

n a month’s time Giorgia Meloni of the Brothers of Italy is likely to become the first female prime minister of Italy, already prompting fears for abortion rights due to her party’s “post-fascist” reputation. Meanwhile, the gay Israeli MP Amir Ohana, once one of Binyamin Netanyahu’s staunchest allies, has performed well in the primary vote to select his right-wing party’s candidates for the country’s general election in November; Ohana, a former justice minister, is seen as a likely future leader of Likud and prime minister.

These developments are part of a broader trend whereby women and LGBT people have become more prominent among national-populist political parties. At present more than half a dozen right-wing populist parties in Europe are led by women, from Alice Weidel of Alternative für Deutschland (AfD) to Marine Le Pen of the Rassemblement National. Significantly, these women usually do not reinforce traditional gender roles: Le Pen is twice divorced; Nicole Höchst of the AfD is a single mother of four; and Weidel is a lesbian, raising two children with her partner.

Weidel’s career reflects how much things have changed when it comes to LGBT people on the right. The days when the likes of Pim Fortuyn, the gay Dutch anti-Islam politician assassinated in 2002, were rarities are long gone. Florian Philippot, until 2017 the most senior man in Le Pen’s party, is gay; Siv Jensen, leader of the Norwegian anti-immigrant Progress Party from 2006 to 2021, was honoured with a “gay best friend” prize at a Norwegian LGBT award ceremony.

A key shift in the past 20 years has been the accommodation of ultra-conservative and far-right parties to feminism and LGBT rights. Milo Yiannopoulos, now banned from most social media platforms but presumably still out there somewhere, pursued his career as an alt-right commentator by juxtaposing his sexuality with his politics to shock and provoke. The current generation of national-populist politicians do the opposite, using their sexuality or gender to try to “normalise” their political views.

Another important change is that many of these parties are successfully using LGBT rights and feminism as a means to win votes. In Italy in particular the nationalist right has had notable success in winning over women who previously voted for parties of the left. Indeed, the resurgence in far-right and ethno-nationalist politics across Europe owes a debt not merely to female activists but to a deliberate adoption of “feminism”: Höchst claims her party is “the only party in Germany who is really fighting for women’s rights”.