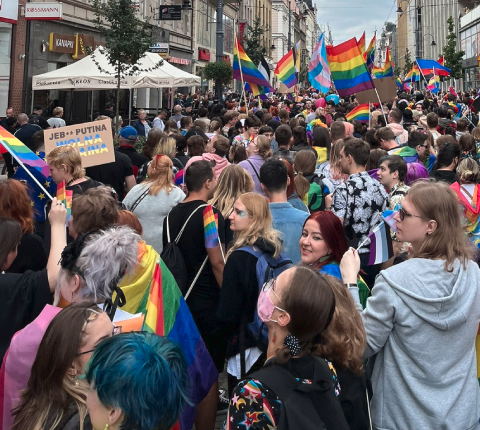 On 3 September, nearly 4000 people hit the streets of Katowice for the city’s annual LGBTQ+ Pride and equality march.

According to Notes from Poland, the annual event was a collaborative venture with the Ukrainian city of Odesa to show solidarity with its queer community.

While there were no violent interruptions from anti-LGBTQ+ individuals, it was met with opposition from the conservative group Fundacja Pro.

Before the march, Katowice’s mayor attempted to ban the organisation from attending, but a court overturned the decision – which resulted in the group showing up with anti-LGBTQ+ signs and banners.

Like Katowice, the 1,000-person event was a peaceful affair despite previous years of violence and having a heavy police presence.

“There is an absolutely huge change compared to previous years,” one attendee told Note from Poland. “We are extremely happy that our marches have changed our reality.”

Katowice and Lublin’s Pride marches weren’t the only ones to take place in Poland this year.