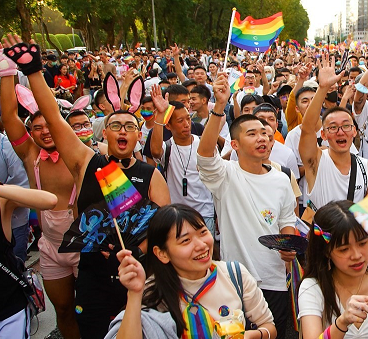 The 20th annual Taiwan LGBT+ Pride will include a parade, a show, and a market.

TAIPEI (Taiwan News) — The 20th annual Taiwan LGBT+ Pride celebration will be held on Saturday (Oct. 29) and Taipei City Hall Plaza will serve as the centerpoint for activities.

Pride will begin at noon with the opening of the Rainbow Market, where several dozen domestic and international organizations who support LGBT rights will set up their booths. Attendees will have the opportunity to purchase their products and learn about their work.

The first half of the Pride show will begin at 1 p.m. and will include a mixture of performers and speakers, focusing on various aspects of Pride and the event’s history. The parade itself will begin at 2 p.m., with two routes departing from Taipei City Hall.

Both routes will begin their trek down Renai Road, before splitting into a north loop and south loop, eventually reuniting back at Taipei City Hall Plaza. The second half of the show will begin at 4:50 p.m., after most of the parade participants have returned, with official Pride activities wrapping up around 7 p.m.

Singer-songwriter Sandee Chan, who has been an LGBT rights activist for 20 years, will headline Taiwan LGBT+ Pride as this year’s “Rainbow Ambassador.”

To celebrate the 20th anniversary of Taiwan LGBT+ Pride, the Taiwan Rainbow Civil Action Association (TWRCAA), the volunteer group tasked with planning Pride every year since 2012, decided on “An Unlimited Future” as this year’s theme. They wanted to organize a Pride that reflects on the past while keeping the focus on the future of LGBT rights in Taiwan.

Per the TWRCAA website, this year’s theme is about advancing the legal rights of the LGBT community in Taiwan, while also challenging preconceived notions of sexuality and gender.

Although the passage of same-sex marriage in 2019 was a major milestone, Pride 2022 is trying to shine a light on the sociopolitical inequalities LGBT individuals still face in Taiwan, especially with family services like adoption, In vitro fertilization (IVF), and cross-national marriages. In addition to increasing legal protections, the TWRCAA is also calling for cultural change and reconfiguring relationship ideals to extend beyond the image of a monogamous, heterosexual marriage with children.