Over a decade in the making…e-tolls finally scrapped 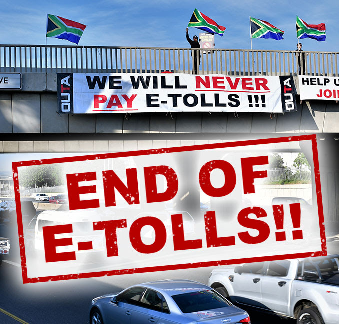 Motorists in Gauteng will be breathing a collective sigh of relief after Gauteng Premier Panyaza Lesufi confirmed, “We are now ready to start a new life without e-tolls in Gauteng”.

This clarity comes in the wake of pronouncements made by Finance Minister Enoch Godongwana in his mid-term budget policy statement. Godongwana announced National Treasury will on board 70% of SANRAL’s debt while the Gauteng provincial government will cover the remaining 30%. Godongwana said “…the costs of maintaining the 201 kilometres and associated interchanges of the roads and any additional investment in road will be funded through either the existing electronic toll infrastructure or new toll plazas, or any other revenue source within their area of responsibility.” But any confusion over whether future funding models would include e-tolling has been put to bed by Lesufi. BizNews correspondent Michael Appel spoke to Automobile Association spokesperson Layton Beard in the wake of the announcement. Meanwhile, Wayne Duvenage from the Organisation Undoing Tax Abuse – OUTA – says this is the culmination of the biggest civil disobedience campaign in the country’s democratic history. – Michael Appel

I think, effectively, it means that e-tolls have been scrapped. There’s no way back from that. The mechanism to collect money through e-tolls is effectively no more. There was an SMS that was sent to registered users [of e-tolls] late this afternoon in which it said pronouncements on e-tolls had been made. That’s obviously referring to the fact that it has been scrapped. They also said the impact on your Sanral account will be communicated to you soonest. And that means, in our minds that, people are going to be told that any outstanding money that is owed to Sanral will not be collected or pursued any more. That’s another very positive development we need to look forward to now. We know that the system has failed and government has acknowledged it has failed by scrapping it effectively. We now need to look at how roads are going to be funded and how development is going to be funded for road infrastructure going into the future. That remains for us a very key consideration as we mull over and digest what happened in Parliament this afternoon for everyone’s benefit.