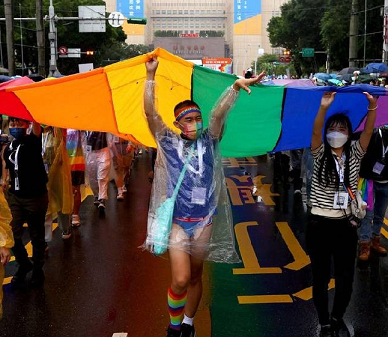 Taiwan legalised same-sex marriage in 2019 in a first for Asia, and is proud of its reputation as a bastion of LGBTQ+ rights and liberalism.

The rainy streets of central Taipei were packed for the annual parade, the 20th since it began and including go-go dancers and drag queens on the back of colourfully decorated trucks, joined by several senior members of the ruling Democratic Progressive Party (DPP).

“I’m very proud that Taiwan has Pride,” said social worker Chang Chi, 28, who took part with her girlfriend. “Taiwan is the first place where same-sex marriage was legalised in Asia. That’s not possible in many countries. Taiwan is a place where you can be who you are.”

Organisers put the number of attendees at 120,000, some of whom also carried flags and banners in support of Tibet, Hong Kong and Ukraine.

President Tsai Ing-wen, in a Facebook message of support for the Pride march, said people could scarcely have imagined 20 years ago that Taiwan would have lead the way in legalising same-sex marriage in Asia.

“Now, being able to choose marriage is something that most people find commonplace,” she wrote.