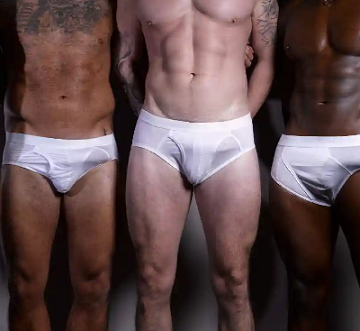 This Channel 4 show about men with genitals up to seven inches around is an often eye-watering watch with plenty of point-and-laugh moments – until it turns thoughtful.

ow big is your penis? Average? Largeish? Big? Ah – but is it documentary big? The entry point – and just pardon the puns from hereon out – for qualifying for shows like My Massive Cock (the latest addition to Channel 4’s Truth and Dare season celebrating the channel’s 40th anniversary, though they style it My Massive ****) seems to be 8in [20.3cm] (erect, for the avoidance of doubt). But most of the contributors come in at (I told you – just pardon them all, else we’ll be here all day) around 9.5in and Matt and Andy’s are each 10.5in. “I do get lightheaded when fully hard,” says Matt. That, it turns out, is the least of the poor man’s problems. But we’ll get back to that.

My Massive Cock seems at first to be following in the un-fine tradition of penis documentaries. They appear with what I consider to be intriguing frequency on all channels, suggesting that commissioning editors and/or film-makers have questions unanswered and insecurities they have not yet overcome (be braver, boys! Or go to therapy!). Sometimes they are about small penises, more often about large, but they are all essentially flippant, cleaving to the underlying point-and-laugh formula that has served the British public so well in matters of sex generally, and genitals specifically.

And my God, there were some specific genitals in My Massive Cock. There was Joe’s, which could not have been more specific if he’d tried. “I’m a shower,” he said, shyly, of the 9.5in of schlong clearly visible through even the most carefully designed pants and thrown into even greater relief by the fact that Joe himself was 5ft 6in tall and weighed – well, I think it was less than his penis, which was literally thicker than his forearm. Possibly thicker than all forearms. I’ll let you know when I examine it again later, as the life-size replica he made of it and plonked on the pub table is something I will see every time I close my eyes for several days to come.