Opinion: Why Australia’s elite basketballer is ready to tell the world he is gay 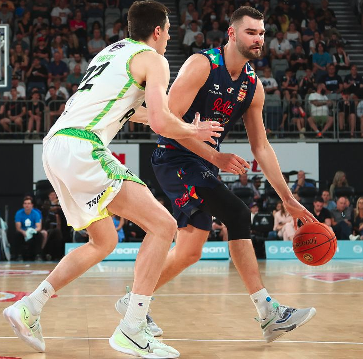 One of the best feelings in the world is playing a game of professional basketball while on peak form.

You get to perform in front of nearly 10,000 people a night; they’re cheering your name, they’re wearing your jersey. And all while you throw down a powerful dunk and flex to the crowd.

Well, it should be the best feeling in the world, right? And for a brief moment, I guess it was.

That was in 2020. I was 22 and playing with the Adelaide 36ers, two years before signing with my current team, Melbourne United.

Now imagine what happens when all of that adrenalin comes to an end after a game. For me, the euphoria was gone the moment I drove out of the arena. I’d get home to my apartment in Adelaide’s coastal suburb of Henley Beach, and be all alone.

I felt I had no choice but to be by myself. That’s when my wave of depression would hit the hardest.

Over my entire career, there was no reality that existed where I could be an openly gay man while playing basketball. Until now.

I’ve played everywhere – Kentucky, the NBA, Europe, the Australian national team – and it’s all the same: for the most part, being an athlete at that level is about making money, dating girls and being the best basketball player you can be.

So I fell in line, no matter how awkward and weird I felt doing it. I just wanted to fit in and not draw any attention to myself. There were almost no examples of a male pro basketball player doing anything other than that, so I was resigned to the fact that my true life would start after I retired.

My depression got so bad that the idea of not making it to retirement became a very real possibility.

There was a night toward the end of 2020 where my loneliness, self-hate and shame finally took its toll, and I decided it would hurt less to take my own life. I had unfortunately decided it was the end. It was only when I woke up the next morning when I realized what I hadn’t done.

PrevPreviousSam Bankman-Fried was hailed as a crypto wonder child. What happened?
NextGrindr founder Joel Simkhai believes he created a monster. Now he wants to slay the dragonNext