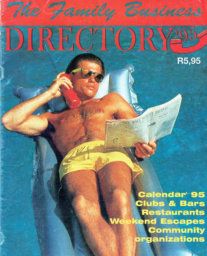 My “Coming of Age” story in the Summer edition had an incredibly good response, but almost everybody wanted to know more…

My military conscription placed strain on my relationship with Dolf, which ended after another year. Almost all gay guys who entered national service with a boyfriend discovered how challenging it was, especially in such a viciously homophobic environment. Gay conscripts had an incredibly tough time and maintaining relationships was virtually impossible. So obviously nobody wanted to go to the army, but once there I realised that there was no escape. I embraced this prison in a pragmatic manner. Besides, the idea of lots of young men in uniform had some sex appeal. Denying the more sensual aspects was simply ludicrous. I dwelled on these thoughts and images while rattling along in a train to army basics in Diskobolos with obnoxious corporals. There was something hot about the odd domineering twink corporal with fake attitude. As state property, we were not given any information about our murky future, which often involved injury or death in a place never heard of before. Anyway, there were two ways to play this game and that was being a pawn with no power, or a pawn with some power. I spent over a year in training with some incredibly dishy guys and finally got my stripes in the navy before bailing out to work for a shipping company. This left me with beautiful memories of dishy naval officers. Rocking up as an athletic sub-lieutenant in my white summer uniform for the employment interview definitely helped, and I was hired!

Three years later, after learning the A-Z in HR of the small shipping company, my sister was diagnosed with a brain tumour and we feared the prognosis. She needed help and I needed a challenge, so I joined her company as a financial consultant and once again learned from scratch. Switching from a comfortable corner office in Cape Town’s harbour with a safe salary to an unknown salary with no corner office was both scary and incredibly exciting. I was taught the golden sales mantra about how hungry brokers always do well! Starving helped, but it was much tougher than anticipated though.

As a coastal boy who operated in chill mode with a few cool comments on life, it was rather chilling to face the wolf at the door and what felt like unemployment. I was used to being paid just for looking pretty and nodding my head at the right moment, maybe not really, but my new battle-hardened gurus took no prisoners! It was sink or swim. Soon, however my rational logic was impaired because I met Gabriel Janse van Rensburg and fell in love, or lust if you insist. Like any Aries and Gemini match in their twenties, we moved at light speed and tried to change the world overnight. Major home renovations followed and both of us acted like two butch check-shirted lesbians. No bricks were too heavy to carry, and cement mixing needed our personal touch. We fought a lot, laughed a lot and eventually cried a lot. The intensity of the project challenged our youth and our short 18-month relationship. We decided to move on, but underestimated the intensity of the sizzling fire of our friendship and mental connection that refused to die to this day. Once some anger subsided, we yearned for a platonic friendship with longevity and sanity, beyond the complex sanctity of a serial monogamous relationship.

As a coastal dreamer, I finally grasped that making money required networking. However, my network was lazing at Clifton in Cape Town, but offered sympathy and a couch upon my return, after ruining my nails clinging onto a fantasy. This, they told me, is the way the gods work to remind you never to leave Cape Town for the evil smog of Johannesburg. The spiritual message is, was, and always will be, that procrastinating on Third Beach Clifton will always be better than sleeping under a bridge in Braamfontein!
Networking works best with those in the same boat as you… Many young gay people were stuck in the same self-employed quicksand that we were stuck in. I bounced ideas and decided to form the first gay business association in Africa, named The Family Business at the end of 1992. It was still outlawed to be gay, in fact being gay remained outlawed until 1998. The Constitution was signed on 10 December 1996, two years to the day that the Gay Pages was born, Saturday 10 December 1994. Some of the anti-gay legislation was still in place until 1998. To this day some of these outdated laws remain in place. Shocking, frankly. Please note, all the gay lawyers out there! Shame on you, South African government.

Africa’s first gay business association quickly discovered that only three people were willing to share the work burden for the cabaret shows that we thought would be more fun than boring business meetings. Gabriel Janse van Rensburg, Dimitri Zouves and I made an unusual trio, but shared a common passion for the successful shows that sold out weeks in advance. The tongue-in-cheek named, The Family Business was spearheading a movement that soon evolved into the Gay Pages.

Strangely, I had met Henk Botha as a 19-year-old in Johannesburg when he had just published the first versions of Exit newspaper under the original name of Link/Skakel. He shared this marvellous tidbit with an intrigued audience in the Skyline Bar in Hillbrow. I insisted on seeing this undistributed newsletter, so a few of us went to Henk’s flat in Hillbrow to observe the first unopened boxes. An incredible coincidence, as Henk played a role in mentoring The Family Business, that evolved into The Family Business Directory which became the Gay Pages. Henk remains in contact like most of the surviving key founders from the ’90s.

Our first event held at Gosforth Park racecourse was a mafia party and Henny Labuschagne, our host had a dishy stripper there who was a teacher by day! The next events took place in gay friendly Melville, at the Mixer Koffiehuis Theatre, where our Dutch host, Jan van den Berg, with his front of house manager, Badia, had bent over backwards to accommodate our outrageous ensemble. Dimitri Zouves made the outfits and played seremoniemonster in drag, while Gabriel took charge of our invitations, floral arrangements and décor.

I did the recruitment, marketing and PR, and synchronised the competitive spirit of our stage mad audience! We redefined the concept of huiskonsert and our parties were sold out within days when the tickets became available.

Emboldened, we moved our shows to the glamorous VIP room at the Johannesburg Civic Theatre. Overnight the game changed, and I was intimidated by the new level of professionalism where every single item had to be planned, from cordless microphones to piano tuning. The Civic was fanatically anal about micromanagement and every show had to be accounted for minute by minute. Our new caterer, Danie Schwartz, was world-class in every respect and all about microscopic detail. Being an unapologetic perfectionist, he was merciless regarding anything that would impact on serving the different courses by more than 60 seconds!
Our renowned shows and Danie’s perfectly served food, unequalled in the theatre business, took us to new heights. Having organised and executed more than 30 events over 27 years, there is little doubt that we had a lot of fun.

Our shows needed to be captured in a newsletter, which soon evolved into a business directory. Neither Gabriel nor I had any idea how to create this, or how difficult it would be, as we knew nothing about computers, writing or publishing. Rocking up with a Checkers bag full of stiffies at the repro house before we printed was insane! Looking back after 25 years of publishing brings a warm gratifying glow.

Gabriel says we were trailblazers, two cowboys armed with a mouse and a keyboard, going where no one else had dared to go in South Africa before and we had no clue what we were doing. When one of us experienced a moment of sanity, and questioned how a magazine was designed or strung together or how you got it printed even if you did manage hypothetically to slap something together digitally the other one was there with quick reassurances that these things were as easy as pie. Oh wait. That never happened. We never doubted our ability to pull this off. I know ignorance is bliss, but it gets you places if you ride that horse hard and never look back on the trail.

Inspiration struck when a friend of mine returned from the US with a gay business directory for San Francisco. The concept was foreign to us and we were instantly inspired by the hefty telephone directory-sized guide. This really was a no brainer, we wanted to create a guide for the South African gay community, but ours would definitely have to be a more glamorous and a glossier version of this Yellow Pages hybrid. It had to be fabulous. We almost immediately started to refer to it as our ’baby’.

My life revolved intensely around financial planning and Gabriel was the Robin to my Batman. We were full-time slaves in a dull heterosexually dominated world. Gabriel’s first priority was to convince me that he was the guy to design this guide. The design software (Corel Draw) that came preloaded on the office PC was the recipe for an instant love affair. Not the best tool for the job, but remember the clueless part from earlier…

Inspiration and an abundance of creative over eager energy was still no consolation for the lack of knowledge and experience. Gabriel had no idea that a font was not only something that held water, that letters and words and paragraphs required thoughtful and careful spacing and sizing, that fonts should be chosen wisely, they were like candy begging to be devoured… that blank space was a thing, so was 300dpi, and CMYK, and stock photographs. Corel Draw was never designed to be layout software, but amyl nitrate was also never intended to be poppers. So, we had a PC with design software, we were absolutely inspired to create this directory, all that was left to do was to convince me that he was the twink for the job. I agreed that Gabriel could design the first advertisement that was sold and if the client loved it the job was his. The client loved it.

These were frontier days and we were shooting from the hip. The office PC was a temperamental little dinosaur performing at a glacial pace that taunted with shutdowns at the most inopportune moments. Software was not designed yet to automatically save your work, and thus your sanity. You had to remember to hit ’save’ manually every so often. The beast would crash randomly and invariably vaporised hours of work. I remember Gabriel’s newfound colourful vocabulary with glee!

The first edition had a clunker of a title – The South African Family Business Directory. It was also a very slim baby that looked more like an overweight neighbourhood pamphlet. We spent hours searching for a cover image that remotely resembled a gay businessman. Our dude was perfect! Our baby was born! 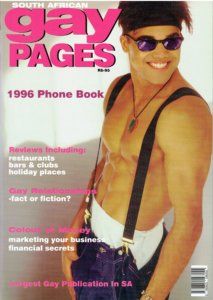 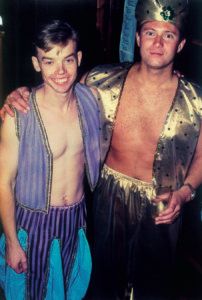 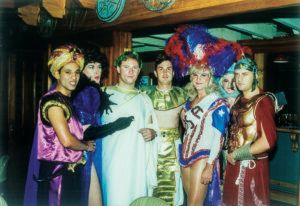 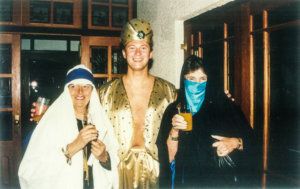 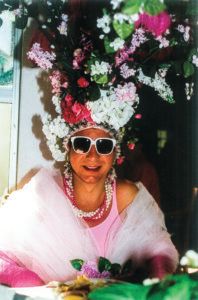 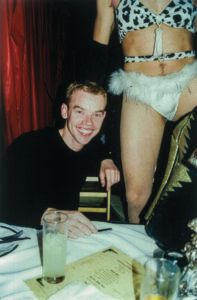 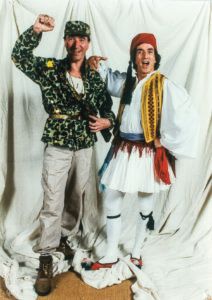 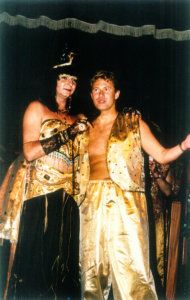 PrevPreviousMY ‘80s ADVENTURES IN PORT ELIZABETH
NextAll hail Jacob Zuma! In the war on corruption, the man from Nkandla has wonNext