LGBT people in Italy says they are living in fear and are pinning hopes on a new law. 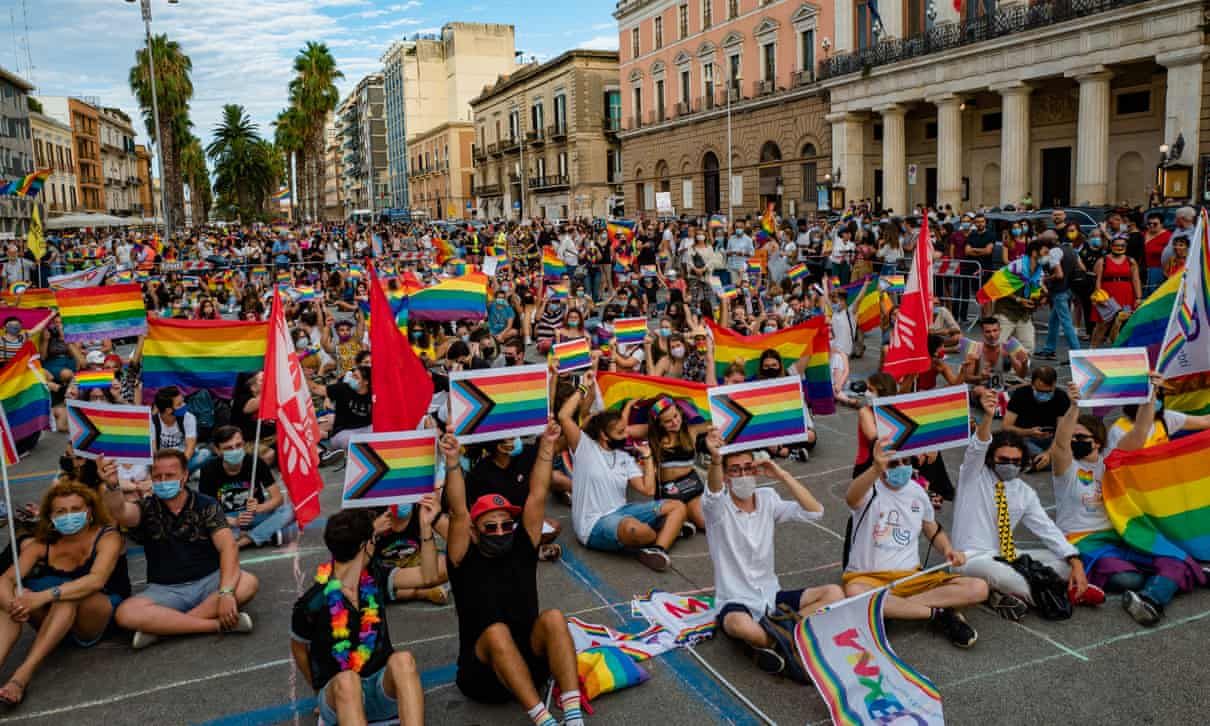 Debate on long-awaited bill that would punish discrimination and hate crimes towards LGBT people opens on Monday.

For 15 years, Marco and his boyfriend had lived together fairly peacefully in a town outside Rome. Then, in early June, a neighbour started harassing them.

“It began quite lightly, with him being provocative whenever we met in the street,” the 38-year-old said. “Then he came to our home and forced his way in, calling us ‘dirty faggots’. My boyfriend managed to get rid of him but he returned with a baton and threw himself against the door, repeating the same insults and threatening to set us alight when we were asleep.”

The man, who had recently moved into the same building, has incessantly taunted the couple over the past month, threatening to also torch their car. Marco has been recording evidence on his mobile phone, but his pleas to the police for help have so far been ignored.

“We’re living in fear,” Marco said, citing the example of a gay friend who was almost killed by his antagonist following repeated harassment. “Twice the police came, and twice they did nothing.”

The couple are hoping they will soon be protected by a long-awaited law that would punish discrimination and hate crimes towards LGBT people. Politicians will begin debating the draft legislation, already being virulently contested by far-right parties and religious groups, in parliament on Monday.

“We need this law,” Marco said. “This guy came to us simply because he hates gays. This isn’t anything new, it happens to gay people all the time, but many do not report it through fear.”

Although Italy approved same-sex civil unions in 2016, the country lags behind its EU partners in creating anti-homophobia measures. An EU-wide survey published last autumn showed that 55% of Italians accepted LGBT people – far below the EU average. Attempts at progress or even just meaningful debate have been stymied by a macho culture, Catholicism and support for far-right parties. LGBT rights associations have linked a rise in hate crimes in 2019 to the prominence of Matteo Salvini’s far-right League, which continues to poll as Italy’s most popular party.

Attempts by various governments over the past three decades to enshrine gay rights in law have either been stifled or sabotaged. If approved, the new law would be an extension of an existing law that punishes racist violence, hatred and discrimination. In addition, it would criminalise misogyny.

After a spate of recent attacks against gay people, proponents argue that the legislation is urgently needed. In late June, a 25-year-old man was brutally attacked by a gang of seven people as he walked hand-in-hand with his boyfriend in the city of Pescara. Less than two weeks later, a gay couple were assaulted by a group of six after they kissed each other at a train station in Cinque Terre, Liguria. At a recent demonstration in Rome in support of the law, two teenage girls, who were holding hands, were spat at and insulted by a man attending a nearby counter-protest organised by the League and its political partner, Brothers of Italy.

Fabrizio Marrazzo, a spokesperson for Gay Centre, a Rome-based association, said it received about 20,000 reports of discrimination against LGBT people a year, of which about 9% are severe.

“But many do not report the discrimination as their families do not know about their sexuality,” he added.

Alessandro Zan, a gay politician with the Democratic party, part of the ruling coalition, and architect of the draft legislation, was threatened with death by an online opponent unless he withdrew the bill.

Detractors, including Salvini and his Brothers of Italy counterpart, Giorgia Meloni, claim the law would suppress freedom of expression. At the protest in Rome, Salvini said: “I’m here to defend the right of a child to have a mother and a father … tomorrow I don’t want to be tried for defending family rights.” Meloni described Zan’s law as “a crime against opinion”.

“The idea that the law would restrict free speech is such fake news,” said Zan. “The law works to fight discrimination, not limit the freedom of thought. They are using LGBT people as an enemy to fly an ideological flag and ignite hatred, rather than discuss the merits of the law.”

The far-right parties are in sync with the Italian bishops’ conference, which said the bill would mark “the death of liberty”. A priest in Puglia recently held a vigil among parishioners to pray for the law’s failure. Another in Sicily who opposed the law said during a sermon: “If you express an opinion against homosexuals, or don’t agree with two men adopting a child, you could end up in jail.”

The Eurobarometer survey, published last autumn, showing 55% of Italians accepted LGBT people was far below the EU average of 72%. However, campaigners believe a significant part of the population would accept the new law.

“Those who attack it with such aggression are in the minority,” said Luisa Rizzitelli, an LGBT activist. “Italy is behind in respect of accepting diversity … but if we ask people if they want to make hatred against LGBT people a crime, I truly believe they would say yes.”

Zan said: “While it is true that there is still strong homophobia, stemming from a patriarchal culture, the country has also made progress. If you look at the pride events across the country, they are full of young people and this gives hope that, in the future, citizens will be much more open.”

PrevPreviousAre we turning into a nation of thieves in SA?
NextEmmys Snub Transgender Stars of Pose, EuphoriaNext