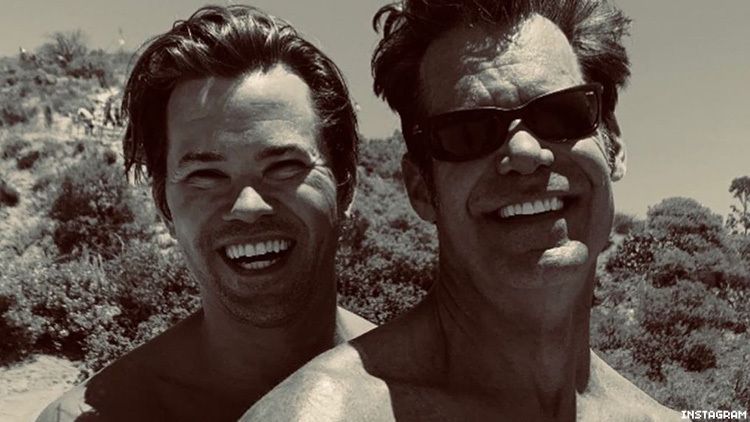 For the uninitiated, filming a sex scene with someone you’re dating might seem like the easiest thing in the world — you’re getting paid to pretend to do something you’re probably already doing. But as revealed by actor Andrew Rannells, there’s an aspect of it that people don’t think about.

In what he recalls as his seventh appearance on Late Night with Seth Meyers, the actor starts chatting about working on the dark comedy Black Monday. The show, which had been on a slight hiatus given the pandemic, features Rannells playing Blair Pfaff, a bisexual aspiring stockbroker with a wife and a boyfriend. His boyfriend, Roger Harris, is played by his real-life boyfriend Tuc Watkins.

This isn’t the first time the pair have worked together: they played lovers in Boys in the Band both on Broadway and on the impending Netflix film. But Meyers wanted to know if there was a difference doing sex scenes with someone you’re dating versus someone you don’t know.

“Well you know having done both now, I would say the anxiety is a new kind of anxiety because I’ve done it,” Rannells said. “Like on Girls I’ve done a few sex scenes: a few with Corey Stolls who is so fantastic but we didn’t really know each other so that was kind of awkward. It was figuring out what are you comfortable with and is this ok and how do I touch you?

“With Tuc it was sort of easy to block it and get into it but when it came time to actually filming it, all of a sudden I had this realization that I was surrounded by the crew who had now become friends of mine,” he continued. “I thought I wonder if they’re thinking ‘So that’s what it looks like. That’s what they do at home. That’s how they touch each other.’ So then I got weirdly self-conscious in a different way.” Sounds like someone isn’t overtly into PDA!

“All that said,” Rannells continued, “it was much easier to do it with someone that you know.”