Heat rises, as Dlamini Zuma hits out at ‘unqualified’ Basson 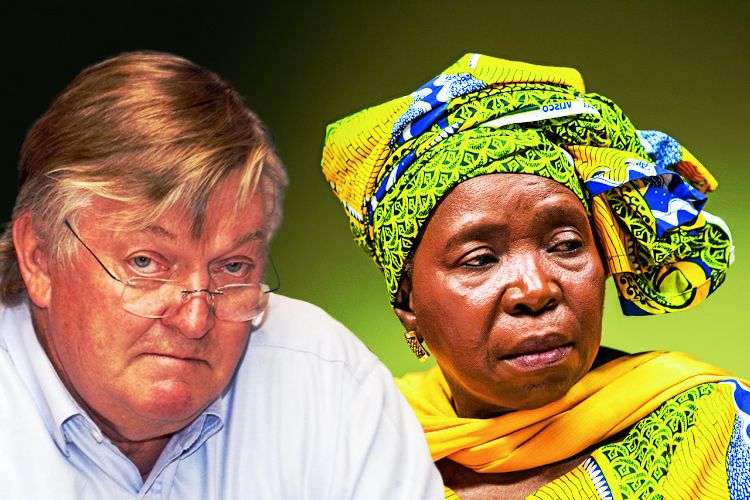 Simply lifting the ban won’t shield Dlamini Zuma or the government from accounting for exactly how this decision was made.

Even though the government seems to be on the verge of scrapping its booze ban, the heat is rising between co-operative governance & traditional affairs minister Nkosazana Dlamini Zuma and former Shoprite CEO Whitey Basson ahead of a court clash next week.

On Tuesday, the High Court in Pretoria will hear an application by 120 wine farms, led by the nonprofit Southern African Agri Initiative (Saai), to declare the ban unlawful. Basson, as the owner of one farm, Klein DasBosch, argues that the prohibition will lead to the “irrevocable demise of the majority of wine farms and licensed restaurants”.

This is no theoretical concern. The wine industry, which includes 2,873 grape producers and 542 cellars, contributes R40bn to SA’s GDP. Yet thousands of the 300,000 people who work in the industry have already lost their jobs due to the lockdown.

But in a new 86-page replying affidavit, Dlamini Zuma not only argues that she had no duty to consult with anyone before imposing the ban, she bluntly dismisses Basson’s arguments as “simply baseless”.

He “ventures other opinions for which he is plainly not qualified”, she says. At best, she argues, Basson “has experience in the grocery retail sector [but] is not an expert relating to the exigencies of governance during a pandemic”.

However, in a surprisingly inflammatory statement, Dlamini Zuma rubbished his argument that alcohol could be allowed in “cool green spots” where Covid-19 has retreated.

“Dr Basson refers to ‘cool green spots’ as if certain parts of this country live and operate in silos … the burden of Covid-19 is shared among affluent and less affluent areas. Planning by government is not done as it was under apartheid.”

This clearly got under Basson’s skin. On Thursday, he filed a new 10-page affidavit, in which he says it is “outrageous and uncalled for” for Dlamini Zuma to suggest he wanted the government to conduct its planning “as it was under apartheid”.

“My business philosophies and [ethos] have not been informed, influenced or shaped by the principles of apartheid. I never supported the apartheid government, and was never a member of the National Party or a supporter of the apartheid regime. My whole family and I loathed apartheid,” he says.

He argues that, actually, he is qualified to speak, given the fact that he owns Klein DasBosch and has worked for nearly four decades dealing with “suppliers to the retail industry including wine producers”.

Basson says the idea of the “cool green spots” actually came from the government itself, which set out how certain “hotspots” should be managed in its initial lockdown regulations. “This is not something I thought up myself. It, however, appears that the minister has made an about-turn with regard to this approach,” he says.

In fact, he says, if you don’t look to incrementally lift the ban in areas where the risk is low, it leads to a frightening scenario in which “the whole country remains subjected to the ban because there are still one or more hotspots left — this will lead to economic chaos”.

Apart from her surprisingly pointed criticism of Basson, Dlamini Zuma devotes most of her affidavit to arguing the prohibition was entirely rational, and made to “reduce the potential strain on the health-care system” at a time when Covid-19 cases were threatening to overwhelm the hospitals.

‘We didn’t have to consult’

In a nutshell, her argument is that by banning alcohol, you’ll keep people out of hospital trauma units, freeing up beds for Covid-19 patients. She estimates that 17,100 of the 34,000 admissions to trauma units per week “are linked to alcohol consumption”.

The industry’s response is that first, she never considered less restrictive measures to curb alcohol-related trauma incidents. Second, in areas where Covid-19 infections have peaked and there are now plenty of hospital beds available, there’s no need to keep the prohibition in place.

Perhaps Dlamini Zuma’s biggest weakness, however, is her frank admission that she didn’t consult with the public or the industry before imposing the ban.

In her affidavit, she argues there was “no general obligation” to consult. “Neither cabinet, nor I, was opposed to consulting again. It was simply that the circumstances on the ground did not permit this. There was an urgent need to take steps that would aid the health challenges,” she says.

And this, she says, isn’t just her view — “it was shared by cabinet”.

Saai head Francois Rossouw, in his most recent response on Thursday, was quick to seize on this.

Rossouw says Dlamini Zuma “has effectively taken a large portion of the work of the legislator upon herself during the prevailing state of disaster — this makes it even more imperative that she obtains input from the public while their duly elected representatives cannot do so”.

Not only is this fundamental to a participatory democracy, he says, but the public expects this.

While Rossouw points out that hardly any other country has such a prohibition, Dlamini Zuma responds that SA is “unique in its context and circumstances”, partly due to its high incidence of HIV/Aids, and spatial issues due to apartheid, which make “physical distancing very difficult”.

“The fact that the industry will suffer losses is regrettable. It is, however, important that financial losses are not accompanied by huge and avoidable losses of life,” she says.

Dlamini Zuma is supported in her argument by health minister Zweli Mkhize, who filed an affidavit this week saying the alcohol industry is “quite wrong when they contend this temporary prohibition is irrational and otherwise unlawful”.

On the contrary, says Mkhize, it was implemented to ensure the government protected society.

The wine farms don’t buy it. They point out that not only are doctors and scientists themselves now calling for the ban to be lifted, but thousands of people are losing their jobs every day as it drags on.

As Rossouw puts it: “It does not really assist to be protected from a virus only to be faced with starvation and adverse poverty.”

Much of this dispute will become moot if the government lifts the prohibition within days — a move which insiders say is imminent.

Still, Rossouw tells the FM the case will go ahead regardless, even if it’s no longer an urgent application. “We have to go ahead. What if there’s a surge in November and they ban alcohol again? We’ve got to put a peg in the ground against this sort of arbitrary and irrational action,” he says.

In other words, simply lifting the ban won’t shield Dlamini Zuma or the government from accounting for exactly how this decision was made.