Gay Pages Autumn 2017: Oscar Wilde The fall of a genius 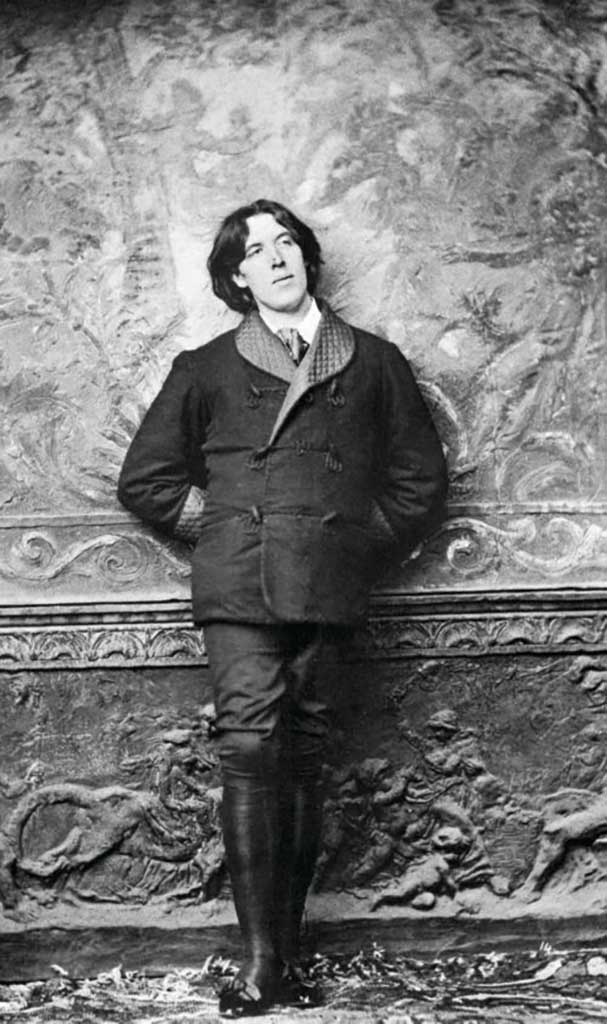 Oscar Wilde had an incredible talent for portraying the human condition. He was a keen observer of the society he was part of and delighted in pointing out the foibles and idiosyncrasies of his time. It was this ability that made him one of the most successful writers of poetry, plays and books of his day. He was celebrated and ridiculed – often for his manner of dress and affected speech. When the fall came, it was swift and catastrophic. Oscar Wilde’s light was snuffed out prematurely and the world of literature and taste lost one of its most influential denizens.

Oscar Fingal O’Flahertie Wills Wilde was born on 16 October 1854 in Dublin, Ireland, to parents of considerable social standing. By the age of twenty-eight his father, William Wilde, had graduated as a doctor, completed a voyage to Madeira, Tenerife, North Africa and the Middle East, studied at Moorfields Eye Hospital in London, written two books and been appointed medical advisor to the Irish Census of 1841. In 1864, he was knighted. When William opened a Dublin practice specialising in ear and eye diseases, he felt he should make some provision for the free treatment of the city’s poor population. In 1844, he founded St. Mark’s Ophthalmic Hospital, built entirely at his own expense.

Oscar’s mother, Jane Francesca Elgee, was a freethinking revolutionary and in 1846 she started writing revolutionary poems, under the nom de plume ‘Speranza,’ for the weekly Irish newspaper, The Nation. A gifted linguist, she translated Wilhelm Meinhold’s gothic horror novel Sidonia the Sorceress. Oscar would later read the translation with relish, and draw on it for the darker elements of his own work.

Jane’s first child, Oscar’s brother, William Charles Kingsbury, was born on 26 September 1852 and the daughter she had longed for, Isola Emily Francesca, was delivered on 2 April 1857. Emily died from a sudden fever ten years later and Oscar, who was deeply affected by her passing, carried a lock of her hair sealed in a decorated envelope with him for the rest of his life.

Oscar excelled at studying the classics. In 1871, he was awarded the Royal School Scholarship to attend Trinity College in Dublin. He did particularly well in his classics courses, first at Dublin, then at Oxford. He became known for his involvement in the rising philosophy of æstheticism, led by two of his tutors, Walter Pater and John Ruskin. After university, Wilde moved to London into fashionable cultural and social circles.

He married Constance Lloyd on 29 May 1884. Perhaps he felt at some level, at least, that he needed to conform to societal norms, but from his letters one does get the impression it was a real love match.

Constance was four years Oscar’s junior. She was a strong, outspoken woman and by all accounts a good match for her equally outspoken husband. They had two sons in quick succession, Cyril in 1885 and Vyvyan in 1886. Now, with a family to support, Oscar went to work for Woman’s World Magazine from 1887-1889. Following that, he entered a six-year period which was to be the most creative time of his life and he became firmly established as a playwright.

Late 19th century London was enjoying a time of great prosperity and Wilde became a fixture among the elite. His richly dramatic portrayals of the human condition were conceived in this milieu. The English were well-educated and literate. They embraced literature like never before and Wilde wrote poems, short stories and plays. Only Shakespeare was more famous. His stories and plays still delight readers and audiences today. Who among us have not felt a pang of sorrow at the death of the poor swallow in The Happy Prince? Plays like An Ideal Husband, The Importance of Being Ernest and Lady Windermere’s Fan have been made into movies and stage performances delight theatregoers across the globe to this day. And then there is the dark tale of beauty and immortality in The Picture of Dorian Gray – a book that shocked and scandalised Victorian society. It is his only novel and its implied homoerotic theme was considered highly immoral by the Victorians and played a considerable part in his later legal trials.

Wilde was a dandy and many caricatures lampooning his manner of dress exist. As a ‘spokesman’ for æstheticism, he lectured in the United States and Canada on the new ”English Renaissance in Art,” styling himself as a ”professor of æsthetics.” Known for his biting wit, flamboyant dress and glittering conversation, Wilde became one of the best-known personalities of his day.

In December 1881 he sailed for New York and his 50-lecture tour of the US was extended to over 140 speaking engagements and lasted 260 days. He was a sensation even though most Americans thought him quite odd – dandyism was distinctly British. While in the US, Oscar expressed the wish to meet Walt Whitman. They spent an afternoon together at the American poet’s house, and in a letter to George Cecil Ives, Oscar wrote: ”I have the kiss of Walt Whitman still on my lips.” Whitman was gay, and there has been some speculation that the pair might have done more than just talk… (Whitman was 62, Wilde 27.)

His life was to set to change forever when, in the summer of 1891, Oscar met Lord Alfred ‘Bosie’ Douglas, the third son of the Marquis of Queensberry and entered into a tempestuous relationship with the young aristocrat. He wrote Bosie many love letters and in one he writes:

Your sonnet is quite lovely, and it is a marvel that those red rose-leaf lips of yours should be made no less for the madness of music and song than for the madness of kissing. Your slim gilt soul walks between passion and poetry. I know Hyacinthus, whom Apollo loved so madly, was you in Greek days.

Why are you alone in London, and when do you go to Salisbury? Do go there to cool your hands in the grey twilight of Gothic things, and come here whenever you like. It is a lovely place and lacks only you; but go to Salisbury first.

Always, with undying love, yours,

Their correspondence, collected in Oscar Wilde: A Life in Letters, makes for an infinitely inspired addition to the most beautiful love letters exchanged between history’s greatest creative and intellectual power couples.

Bosie became Oscar’s muse and personal Dorian Gray. They were far from sexually exclusive. Few homosexuals were in those days. Bosie was forgetful, impetuous and by all accounts, a handful. They often quarrelled. He got Oscar to pay for rent boys and often gave them his own clothing, absentmindedly forgetting to empty the pockets, often of letters he and Oscar had written one another. These letters were regularly used by the prostitutes to blackmail the pair and were later used as evidence against Oscar during his trial.

Bosie’s father was a thorn in their side and he set himself the task of driving a wedge between the lovers. John Sholto Douglas, 9th Marquess of Queensberry’s reputation among his fellow Victorians was that of a vain and excitable thug. He was despised by his children, estranged from other relations, and ostracised by members of the House of Lords. He was abusive in every sense of the word. When he wrote publicly, in his violent, sprawling and error-filled handwriting, of the prime minister as ”the Christian whoremonger & hypocrite Gladstone,” or of Gladstone’s successor, the Earl of Rosebery, as an ”underbred disgusting Jew pimp,” he made himself repulsive to everyone except his toadies.

His eldest son and heir apparent, Francis Viscount Drumlanrig, was rumoured to have been involved in a homosexual relationship with the Liberal Prime Minister, Archibald Earl of Rosebery. The day before his engagement – no doubt arranged by his father – was to be announced, Francis shot himself. Alfed, his third son now became the focus of his anger.

Not long after his son’s suicide and public revelations of his impotence (his second wife had their marriage annulled due to the groom’s inability to consummate their union), Queensberry set out to rescue his third son from the clutches of Oscar Wilde
In February 1895, angered by the apparent ongoing homosexual relationship between Oscar Wilde and his son Alfred, Queensberry left a calling card reading ”For Oscar Wilde, posing Somdomite[sic]” at Wilde’s club. His horror of homosexuality – intensified by his suspicions about the reasons for his eldest son’s suicide – resembled that of the religious fundamentalists whom he so truculently denounced.
In 1895, at the height of his literary success, with his masterpiece The Importance of Being Earnest drawing continuous acclaim across the stages of London, Wilde sued for criminal libel, leading to Queensberry’s arrest. Queensberry’s lawyers portrayed Wilde as a vicious older man who seduced innocent young boys into a life of degenerate homosexuality. When the lawyers informed the court of their intention to call several male prostitutes to testify that they had had sex with Wilde, he promptly dropped the case. But Queensberry won a counterclaim against Wilde for the considerable expenses he had incurred hiring lawyers and private investigators. Wilde was bankrupted and his assets were seized and sold at auction. In a final fit of pique, Queensberry sent all the information he had gathered to Scotland Yard.

Wilde was arrested the next day and charged with committing criminal sodomy and ”gross indecency,” a charge only capable of being committed by two men and which covered sexual acts other than sodomy. Two more trials followed and Wilde was sentenced to two years’ hard labour – first at Pentonville, then Wandsworth, then famously in Reading Gaol. Douglas was forced into exile in Europe.

Douglas’s 1892 poem Two Loves, which was used against Wilde at the latter’s trial, ends with the famous line that refers to homosexuality as ”the love that dare not speak its name.” Wilde gave an eloquent but counterproductive explanation of the nature of this love on the witness stand.

Unable to stand the shame, Constance took the children to Switzerland and reverted to an old family name, ‘Holland.’
Upon his release, Oscar wrote The Ballad of Reading Gaol, a response to the agony he experienced in prison. It was published shortly before Constance’s death in 1898. Following his incarceration in Reading Gaol, his health destroyed and reputation in tatters, Wilde went into exile in France. Following his release on 19 May 1897, he reunited with Bosie in August at Rouen, but the couple stayed together only a few months. They lived together in Naples for a short while and Wilde claimed that Douglas had offered a home, but had no funds. When Bosie eventually managed to gain funds from his late father’s estate, he refused to grant Wilde a permanent allowance, although he did give him occasional handouts.

Oscar Wilde spent the last few months of his life wandering around Europe staying with friends and renting rooms in cheap hotels. With his health at a low point, a recurrent ear infection had become serious and meningitis set in. On 30 November 1900 ten months after the death of his nemesis, the Marquess of Queensberry, Oscar Wilde died at the Hotel d’Alsace in Paris. He was still bankrupt.

Bosie lived to the ripe old age of seventy-four and passed away on 20 March 1945. He married and had a child. He had a chequered life and also spent time in prison for defaming Winston Churchill. For much of his life he tried to distance himself from Oscar, but after his incarceration his attitude softened somewhat.

One can only speculate as to the heights Oscar Wilde’s genius would have reached had his life not been derailed by the Marquess of Queensbury and, to some extent at least, his infatuation with Bosie. 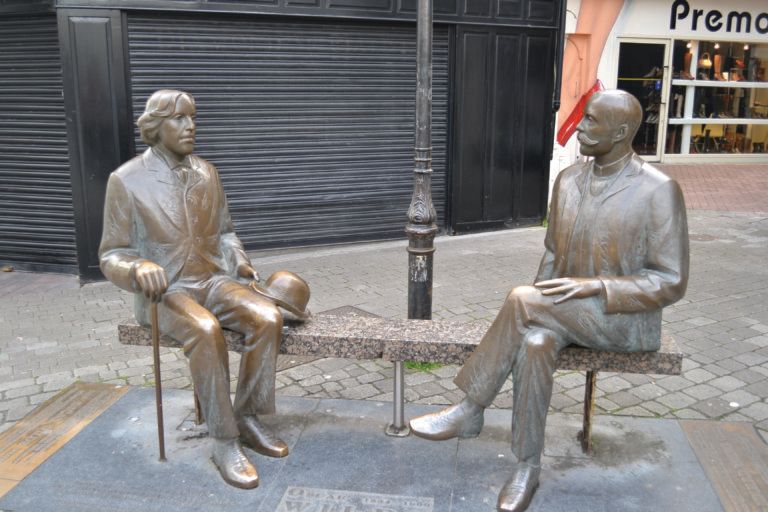