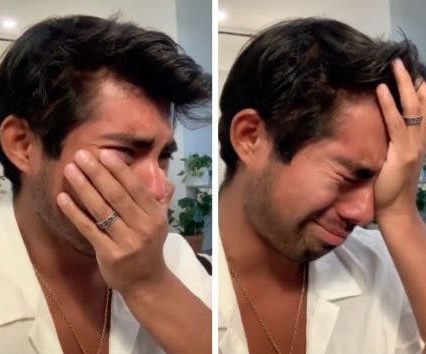 Telling your parents you’re engaged to marry should be a joyous moment. Not so for one man who accepted a proposal of marriage from his boyfriend, and was then faced with having to tell his homophobic mother.

Despite already knowing her views, social media influencer Henry Jimenez still wants his Mexican mother to accept his wedding plans and consider attending the ceremony. He filmed himself calling his mom…. and her disappointed reaction to the news.

Jimenez re-shared the video to TikTok and then Instagram earlier this week. The conversation is in Spanish but he provided English subtitles.

“I told my mom that I got engaged with the man of my life,” he said in the accompanying caption. “Many of you don’t have tik tok so I’m also posting this video here. This as I said IS SO HARD for me to share, but today I got a message from a kid telling how much he felt inspired after watching this and told his parents his biggest secret. That makes me so happy and makes it all worth it. What are we doing in this world if we are not being truly happy.”

In the video, Jimenez nervously informs mom he has some news.

“What do you mean you’re getting married?” his mom replies on hearing about his engagement.

“Do you know that’s a sin in front of the eyes of God,” she goes on to say, informing her son that he will never be able to enter Heaven because he sleeps with men.

“You’re so wrong,” she says after he tells her he’s not going to change. “That guy has blinded you. He doesn’t know God and he doesn’t want anything to do with God.

“You broke my heart in a thousand pieces every time you talk to me about that. You make me sad. You make me sicker than I already am. You. The day I die, you are gonna be the one who kills me because I’m always thinking about the stuff you’ve done wrong.”

By this stage, Jimenez is in tears but she doesn’t stop.

“You sin. Why did you change God for money? Just like Judas.”

She goes on to blast the Pope, who has himself voiced support for same-sex couples being allowed to enter civil partnerships.

“The Pope is with Satan. I know who the Pope is: A satanic someone who will never see God’s kingdom if he doesn’t repent.

“Think really hard about what you are doing. Think about it and don’t sin for Satan.”

Jimenez, knowing that continuing the conversation at this stage is pointless, quickly brings the call to an end.

Jimenez is engaged to partner Kasey Kerbox. He shares images of the two of them on his social media. Kerbox shared a video of his proposal last week, which took place under a glacier in Alaska.

Here’s wishing Henry and Kasey a lifetime of happiness and adventures together. And that mom sees sense eventually!