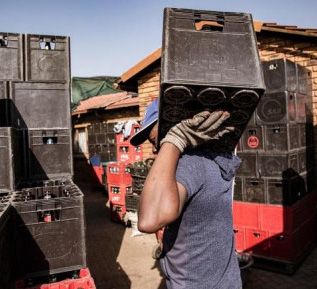 The liquor industry is calling on government to provide some relief when it comes to specific taxes this year.

There are growing concerns that alcohol companies restricted by government’s lockdown simply can’t afford to pay their excise tax, which would have a massive impact on the state’s finances and could lead to a tax revolt down the line.

There are just a few weeks to go before Finance Minister Tito Mboweni will announce new tax proposals in his budget speech next month.

The liquor industry is calling on government to provide some relief when it comes to specific taxes this year.

Against the bleak backdrop of massive job losses, the ban on the sale of alcohol and the vast majority of South Africans finding themselves on a financial cliff, government is walking a tight rope here.

Richard Rushton is group CEO at Distell and he said that the liquor industry was under extreme pressure.

“We pay about R2 billion a month in excise across the industry to SARS and we’ve just gone through a period in December and a ban and what we have is retailers sitting on stock and potentially unable to pay us and in turn, us being unable to pay SARS, so we’re asking for deferral on those amounts.”

Tax executive at ENS Africa, Charles de Wet, is concerned that this year some businesses might start a tax revolt.

“If you look at the sin taxes, the payment cycle of that… there’s a little bit of funding by the company. Your customers must have paid you, the product must already be marked before you pay that across. You simply cannot trade… what do you do in those particular circumstances?”

In November, Mboweni said that there was a R300 billion tax hole that needs to be plugged but it is still unclear how or even if he’ll manage to close it.

In July and August last year, the alcohol industry was granted deferment of at least R5 billion in excise tax payments when alcohol sales were banned.

There are also concerns that the ban on alcohol sales will have a ripple effect on the tax revenue service and ultimately on social grants.

There are renewed worries about the impact this will have on workers, with many more jobs on the line due to a loss of revenue.

“People in the industry might lose income and jobs might be lost. The consequences are enormous, especially at this time of year. It’s going to be challenging for both the industry and SARS indirectly, and the government trying to get the funds to combat the COVID-19 pandemic.”