Take ‘A Moment in the Reeds’ to find romance 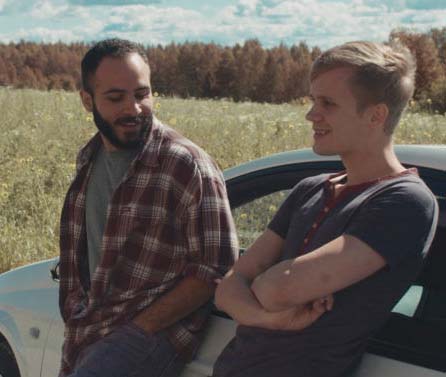 Ya know all those I’ll never forget that summer movies where two young people have some glorious, romantic affair set against beautiful, nature backdrops? Just why does that genre seem to have endless appeal?

Case in point: A Moment in the Reeds, the tender Finnish romance about two men that fall in love one summer. The plot: poetry student Leevi (Janne Puustinen) returns to his family cabin to help his hard-nosed father with some renovations. When his dad leaves unexpectedly, Leevi strikes up an unlikely bond with Tareq (Boodi Kabbani), a Syrian architect and political refugee who Leevi’s dad hired to help with the work. Tensions rise and passions flare as the two men begin to work on each other’s bodies as much as the cabin.

Like so many cinematic romances–gay and straight alike–A Moment in the Reeds plays on both the audience’s thirst for love, and its nostalgia for youth. Director Mikko Makela sets the film apart from the rest of the pack by infusing the story with sociological commentary on immigration, homophobia, masculinity, and parent-child alienation. Those scenes could have easily come off didactic and boring, but Makela keeps things interesting by allowing his actors to improvise (not to mention, do so in various stages of undress). The resulting effect feels downright voyeuristic: it seems as though the audience has just wandered into a conversation between two friends. That also owes a lot to the performances by Kabbani and Puustinen, who have magnetic chemistry together.

A Moment in the Reeds may belong to a formulaic genre, though that doesn’t make the film uninteresting or trite. This romance has a certain self-awareness to it–one that uses a love story to meditate on deeper issues facing LGBTQ people on a global scale. Featuring two fine performances by Kabbani and Puustinen, as well as assured direction by Makela, we recommend it both for its love story and it’s social commentary. We know Leevi and Tareq won’t soon forget their summer together. We have a feeling you won’t, either.