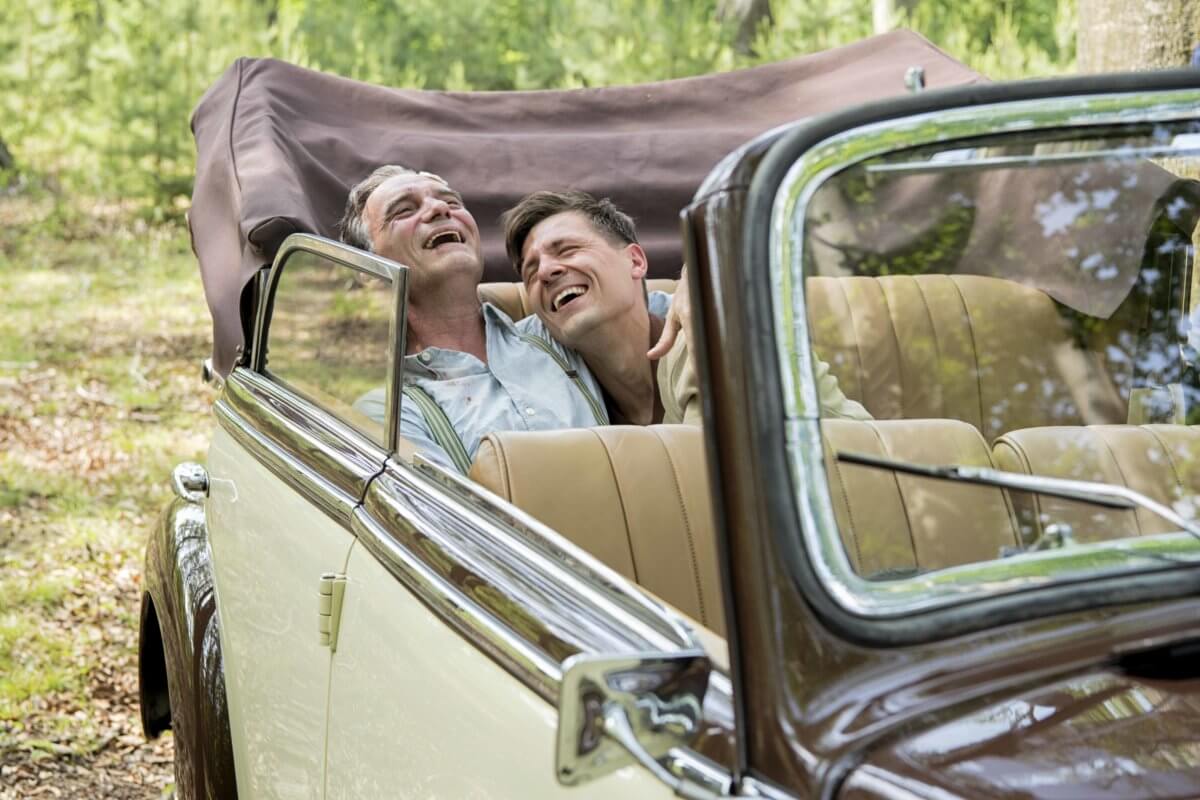 A practitioner of natural healing, he is interviewing a handsome young man, František Palko (Juraj Loj), to be his assistant. Palko, recognizing the spark of Mikolášek’s attraction, offers his employer complete loyalty. Both men acknowledge that their relationship is dangerous; they are living in a country, Czechoslovakia, during a time, the 1950s, when homosexuality was illegal.

Mikolášek is under the communist authority’s scrutiny for perhaps another reason. He has a gift of being able to divine someone’s medical issues simply by examining their urine in a clear glass bottle. Admittedly not a doctor, Mikolášek tells his patients that they have kidney stones or gout, or that they were wrongly diagnosed with polio. He can also determine, with astonishing accuracy, when some is going to die. While his manner is gruff, Mikolášek is always right, but his uncompromising nature does not always sit well with folks. His talent brings long queues of patients — he sees more than one hundred cases over the course of a single day — but others question his skill. “The oracle of urine,” as he is dubbed, is called a charlatan in the newspaper.

“Charlatan,” which is based on a true story, is more of a character study than a conventional biopic, which is to the film’s credit. Holland lets viewer connect the dots as the film toggles back and forth between various narrative strands from critical stages in of the herbalist’s life.

Mikolášek’s youth (the character is played by Josef Trojan, Ivan’s real-life son) gets considerable screen time, and these “flashback” scenes are key to understanding his nature. His early life with his family is shown as Mikolášek prepares a natural salve to save his sister’s gangrenous leg from being amputated. However, his father is against Mikolášek training with Mühlbacherová (Jaroslava Pokorná), a devout older woman who teaches him how to analyze urine. The scenes of the “teacher” and her apprentice practicing their craft are beautiful as sunlight passing through the urine-filled bottles bathes their faces in golden hues. (For all the scenes featuring urine being passed, bottled, shared, and examined, “Charlatan” is elegantly made). But there are harsh moments in the young man’s life, from a devastating scene during the war, to a cruel act of that Mikolášek commits one afternoon. (This is one of two scenes featuring violence against animals that is used to reveal “character.”)

“Charlatan” also depicts the herbalist at work. He is seen helping the poor — Mikolášek generously gives money to the mother of a patient to aid in her son’s cure — to his treating President Antonín Zápotocký as well as members of the Nazi party who put faith in his healing. These episodes allow viewers to become invested in his character. Moreover, they make the subsequent imprisonment and trial Mikolášek and Palko endure quite gripping.

The lovers are facing the death penalty for allegedly poisoning two patients who secured mail-order remedies from the herbalist. Mikolášek, of course, denies any wrongdoing, and hopes his young, inexperienced solicitor, Zlatohlávek (Jirí Cerný), can help him prove his innocence. (Palko is separated from him, despite their being tried together). The case has some wrinkles that suggest the men are scapegoats; their nonconformist politics and sexuality certainly contribute to their persecution.

Mikolášek’s heartbreak at being separated from his lover in prison only adds to the despair he feels being unable to practice his trade. The relationship between the two men is quite interesting. Although it features in only a small portion of the film, there are some lovely, intimate scenes, from their sunbathing naked to cuddling and play-fighting in a car. But Mikolášek also manipulates his lover — in a particularly fiendish way — to keep Palko close. How things transpire between the men in the film’s denouement is subtle, but very emotional.

“Charlatan” is compelling throughout because Mikolášek is such a fascinating character. Ivan Trojan has an intense gaze that is arresting, and scenes of him fending off the father of a dying woman, or being tested by members of the Gestapo, are powerful. But so too are the tender moments Mikolášek shares with Palko. A scene where the herbalist first tries to kiss his assistant is filled with palpable desire and sexual tension.

In support, Juraj Loj exudes sex appeal in and out of his period clothes, however, his character is a bit underdeveloped, which is a drawback. As the young Mikolášek, Josef Trojan acquits himself well.

“Charlatan” may take a prismatic approach to Mikolášek’s life, but it is uniformly strong. Holland introduces viewers to a man and a story that would be unknown otherwise. It is a remarkable tale, well told.