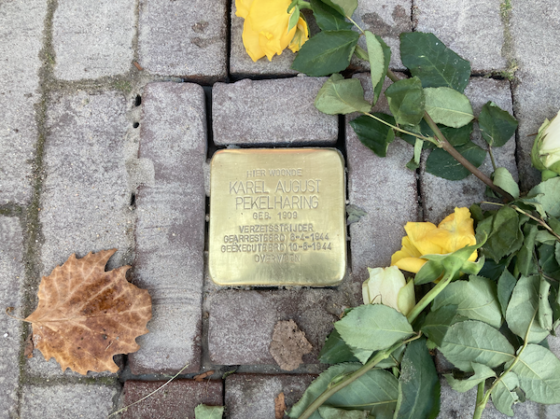 Nine Jewish gay and lesbian resistance fighers are to be given their own ‘stolpersteine’ or commemorative street tiles in front of their last known address.

Gold coloured Stolpersteine, literally ‘stumble stones’ (to make you pay attention), carry the names and date and place of death of those who were transported to camps during WW II.  Some 8,500 stones have been placed across the Netherlands.

The organisation for gays and transgenders COC and historian Judith Schuyf are behind the initiative, which coincides with the Pride celebrations currently taking place in the Dutch capital. It is, they told broadcaster NOS ‘the first time people who were persecuted for what they did and what they were: Jewish, resistance fighter, and gay.’ Schuyf said it is time to recognise the fact that one of the reasons these people were murdered was their sexual orientation.

‘There is nothing left of these people except their names, date of death and the date of their arrest. That is so tragic,’ she told the broadcaster. It is not clear how many Dutch lbtqi people were killed by the Nazis. ‘A lot of the information has disappeared,’ Schuyf said. ‘But something is known about a group of homosexuals who were arrested in Amsterdam and taken to Westerbork in the summer of 1942.

From there they were taken to the camps.’ The nine people who will be given a stone were all party of the artists’ resistance movement. Their number includes Karel Pekelharing, a ballet dancer and choreographer, who took part in sabotage operations and wrote for the illegal press. He was arrested on June 6 and executed four days later in the dunes at Overveen. His stone, in front of the Rombout Hogerbeetsstraat, was the first to be laid on Tuesday.