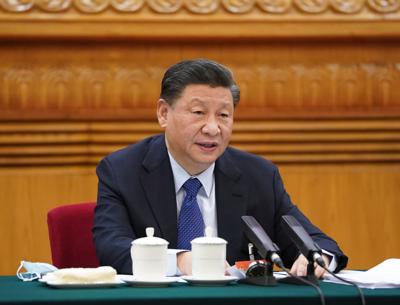 As Americans wrestle over how to defeat the delta variant of COVID-19, China’s government is still refusing to provide the data necessary to determine the origins of the pandemic.

Instead, Beijing — in tandem with Russian state media outlets — is promoting the conspiracy theory that the coronavirus originated in the United States.

Call it the Big COVID Lie.

And it is downright dangerous, both for the world and for China, too.

“It would be difficult if not impossible to prepare for the next pandemic if we don’t get to the bottom of this one,” says Anthony Ruggiero, a former U.S. National Security Council official for biodefense and counterproliferation. That holds true whether the coronavirus originated naturally, jumping from an animal to a human, or leaked accidentally from a lab.

So China, bolstered by an opportunistic Russia, is playing a risky political game.

The March report by the World Health Organization into COVID-19 origins was widely considered inadequate, largely because Beijing waited so long to let the WHO in and refused to provide critical information.

That missing information included data that could determine whether the virus was circulating before December 2019, as well as records of experiments at a Wuhan lab that studied coronaviruses. (The lab data are vital not to reveal a Chinese bioweapon, as some Trump officials hinted at, but to learn what kind of experiments may have leaked accidentally.)

In July, the WHO’s director-general, Tedros Adhanom Ghebreyesus, said it was “premature” to rule out the possibility of a lab leak, saying the world needed “direct information on what the situation of these labs was before and at the start of the pandemic.” He asked China to be “transparent, open and cooperate,” especially on the “raw data that we asked for at the early days of the pandemic.”

Top Chinese officials rebuffed Tedros’ request as “impossible.” They said that consideration of a lab review showed “a disrespect for common sense.”

Instead, to defer attention, official Chinese media revved up its long-running conspiracy trope that the virus originated at Fort Detrick, an Army biological research facility in Maryland. This claim has been promoted by Foreign Ministry spokesperson Zhou Lijian, famous for his aggressive “wolf warrior” diplomacy.

There is zero evidence for such a claim.

I got a sense of the Chinese operation from Ben Dubow, founder of Omelas, a company that analyzes how states manipulate the web to achieve geopolitical goals.

“After the WHO said it would investigate, Chinese official propaganda outlets went all out with [the Fort Detrick theory], twenty articles a day,” Dubow said. In the last 24 hours, he told me Wednesday, there were 15 articles in English, Chinese, Japanese, Spanish, French, and Arabic.

The evidence-free claim of a U.S. bioweapon has been regurgitated by Iranian and Venezuelan officials — and also by Russian state outlets. This is reminiscent of Russia’s claim, after its intelligence agents poisoned defector Sergei Skripal and two others in Salisbury, England, that the gas came from a British lab.

“China and Russia have formed an opportunistic propaganda alliance to blame the U.S. for COVID-19,” writes Dubow, in a fascinating article for the Center for European Policy Analysis (CEPA), where he is a fellow. In other words, rather than seek the source of a coronavirus that has killed untold thousands of their own citizens, Beijing and Moscow prefer to push a Big COVID Lie.

For Russia, pushing lies comes cheap. What’s so tragic about China’s complicity is how Chinese leaders are hurting themselves.

If COVID-19 occurred naturally, probably jumping from bat virus directly to human or via an intermediate animal, this calls into question China’s surveillance programs. It indicates the government can’t stop the next pandemic. If the virus originated from a careless lab accident, lab safety must be rectified.

Whether from nationalism or fear of embarrassment, China is trapping itself with these fake narratives that prevent the world from discovering the true origins of the virus. But the world is trapped, too.

China clearly intends to keep stonewalling. “The WHO, the G7 advanced nations, and President Biden have all asked China to cooperate, but they have gone the disinformation route,” notes Ruggiero. “So what comes next?

“Where does this fit into the U.S.-China relationship?”

Biden has ordered a 90-day intelligence community review of the pandemic’s origins that should be completed in August. But, absent critical Chinese data, that report won’t be definitive. And any move to pressure China to comply with the WHO’s crucial requests will impact fading U.S. hopes for Chinese cooperation on other issues.

Yet to permit China to hide the origins of this coronavirus boosts the chance of another pandemic — a risk the U.S. can’t afford to take.

Moreover, to let China and Russia spread a lie about a U.S. bioweapon presents other dangers. “If we allow it without challenge they will convince large swathes of the [developing] world that the U.S. is the source of the virus,” says cybersecurity expert Clint Watts, author of Messing With the Enemy. “The U.S. is not aggressive enough in its messaging. It is a war over perceptions.”

Even as the administration fights misinformation about COVID-19 on the home front, Biden must figure out how to fight China’s Big COVID Lie and press Beijing to come clean.