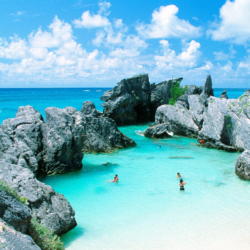 A US travel website has warned tourists without a Covid-19 vaccination to avoid Bermuda because of its strict health precautions.

Melanie Lieberman of The Points Guy – a website focused on the use of air miles – said that other destinations had opened up their borders, but Bermuda’s restrictions had got tighter.

Ms Lieberman said: “The flight to Bermuda from the New York City area is short and painless, to be sure.

“But in addition to the PCR test taken prior to departure, visitors also need to apply for travel authorisation one to three days before arrival with the negative test result.

“The authorisation costs $75 and covers the cost of an on-arrival test.”

She added: “Even after landing at Bermuda’s LF Wade International Airport, travellers aren’t in the clear. I waited for roughly an hour at the airport while my documents were checked.”

Ms Lieberman said: “Often, being able to provide proof of vaccination is like waving a gold ticket: You can typically avoid most testing and quarantine requirements.

“It wasn’t until after I returned from Bermuda that the requirements for unvaccinated travellers became even more onerous.

“Now, a quick trip to Bermuda is more or less implausible for travellers who aren’t inoculated, since a 14-day quarantine at a government-approved hotel is now required.”

She said that the cost of tests in Bermuda could be a problem for families and that if a tourist contracted Covid-19 on the island, quarantine would be expensive.