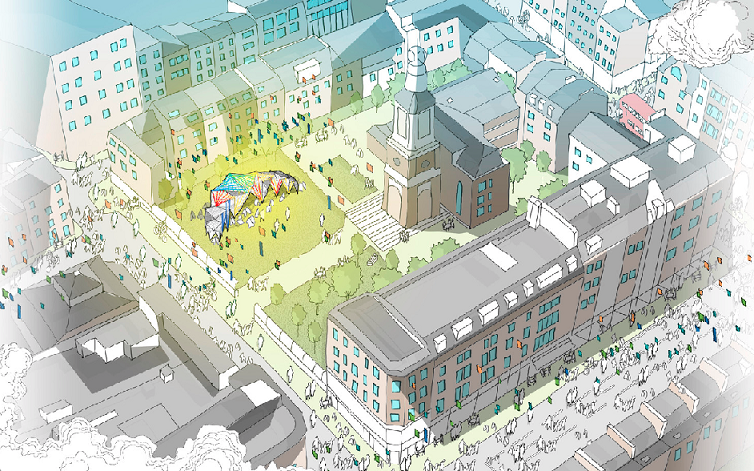 A group of early-career architects working at Foster + Partners has won an open call for a £10,000 installation representing LGBT+ architects.

The collaboration between 18 young team members at the AJ100 top-ranked practice was named overall winner of the contest, which was organised by London Festival of Architecture (LFA) and Architecture LGBT+.

The competition invited architecture students, recent graduates, emerging practices and representatives from more established practices across London to submit ideas for a pop-up structure which could be installed at St Anne’s Church in Soho.

The installation was originally timed to coincide with Pride in London on 11 September and – despite the event being cancelled for the second year running – the installation will still go ahead.

Moving from a small, compressed entrance to an open central social space, the ‘Rainbow After the Storm’ concept celebrates both the LGBT+ community and the NHS and will be constructed from lightweight timber and coloured rope.

Entries by Studio Lux, Up Architects, Andre Kong and Allies and Morrison were also highly commended.

Thurston said: ‘We are delighted to have won the Pride Pop Up design competition, a project that reflects our shared beliefs on inclusivity, diversity, and togetherness.

‘We saw it as an opportunity to explore how architecture can make a positive contribution to society and serve as a beacon of light in times of adversity. We are extremely excited to see how our vision comes to life within the picturesque setting of St Anne’s Church.’