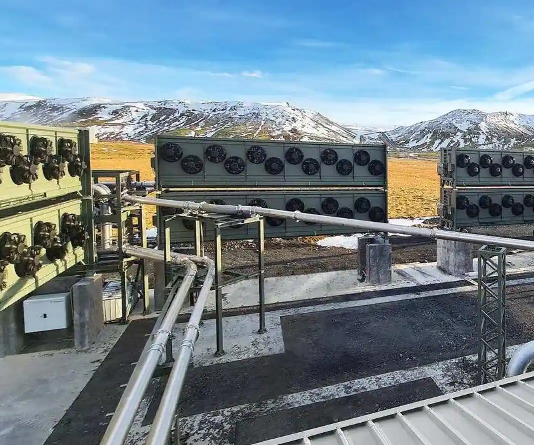 ‘Orca’ will use geothermal energy to pull thousands of metric tons of carbon dioxide out of the atmosphere and pump it underground.

The world’s largest carbon capture plant has come online in Iceland, as entrepreneurs and environmentalists seek to build momentum for technology they see as key to fighting the increasingly dire threat of climate change.

Named “Orca,” the facility is located on a lava plateau in southwest Iceland, reports Michael Birnbaum for the Washington Post. Using a system of fans, filters and heaters and powered by a nearby geothermal power plant, it has the capacity to pull 4,000 metric tons of carbon dioxide out of the air each year and pump it into underground caverns where the gas, mixed with water, will slowly become stone as it cools.

“This is a market that does not yet exist, but a market that urgently needs to be built,” says engineer Christoph Gebald, who co-founded Climeworks, the company behind Orca. “This plant that we have here is really the blueprint to further scale up and really industrialize.”

Climeworks opened the world’s first commercial carbon capture facility in Switzerland in 2017. That original plant has the ability to capture roughly 900 tons of carbon dioxide per year, and uses the captured gas in greenhouses and sells it to carbonated beverage producers.

The construction of Orca single-handedly increases Earth’s annual carbon capture capacity by 40 percent to 13,000 metric tons, reports Corbin Hiar of E&E News, but that is a small fraction of what will be needed to significantly reverse humanity’s carbon emissions. Around 31.5 billion metric tons of carbon dioxide were emitted in 2020, reports Nikolaj Skydsgaard of Reuters. Orca will be able to capture the equivalent of the annual emissions made by 790 cars.

“We need to turn this into a Starbucks, circa 1999, where you see one on every corner,” engineering researcher Peter Psarras told Hiar. “I think this is the future we might see in the next decade.”