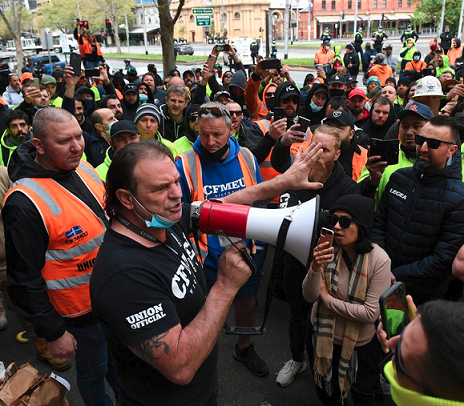 Police in Melbourne fired pepper balls and rubber pellets on Tuesday to disperse about 2,000 protesters who defied stay-at- home orders to damage property, block a busy freeway and injure three officers, leading to more than 60 arrests.

It was the second day of demonstrations in the locked-down Australian city after authorities shut construction sites for two weeks, saying workers’ frequent movement was spreading the coronavirus.

“And it was a challenging and confronting environment,” he added, urging people to stay away on Wednesday.

Protesters included not only construction workers but opponents of mandatory vaccinations and Victoria’s extended lockdown, who cursed the jab, state premier Dan Andrews and the workers’ union leader, who had backed vaccination for members.

“Acts of violence and disruption won’t result in one less case of COVID – in fact it only helps the virus to spread,” Andrews said in a statement.