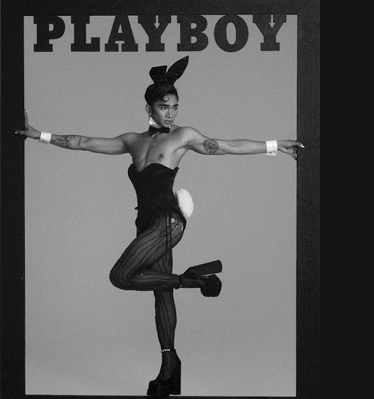 “For Playboy to have a male on the cover is a huge deal for the LGBT community, for my brown people community and it’s all so surreal,” said Rock, a social media influencer.

Playboy wrote in a statement on its website that Rock has joined the ranks of Kate Moss, Dolly Parton, and Kylie Jenner for donning the legendary Playboy bunny suit.

“Although he isn’t the first male-identifying star to wear the suit, he’s in good company: Steve Martin, Ezra Miller, Paul Rudd, Johnny Carson, Burt Reynolds, and Flip Wilson have all borrowed elements of the trademarked costume, some even going as far as to wear the full suit,” the company’s statement said.

In an Instagram post, the magazine, which went fully digital earlier this year, quoted Rock: “For Playboy to have a male on the cover is a huge deal for the LGBT community, for my brown people community and it’s all so surreal. A total ‘is this even f****** happening right now?’ type of vibe. And I’m so pretty.”

Rock is known for his YouTube videos and has released a makeup line. The Filipino American celebrity also stared in MTV Following: Bretman Rock earlier this year. A few weeks ago, he was also named as a guest star for Disney +’s reboot of The Proud Family.

PrevPreviousActor Matthew Wilkas strips down in a motel for Brian Kaminski.
NextRussia could soon ban “LGBTQ ideology” for being an “extremist” movement.Next