Climate change viewed from the Attic of the World. 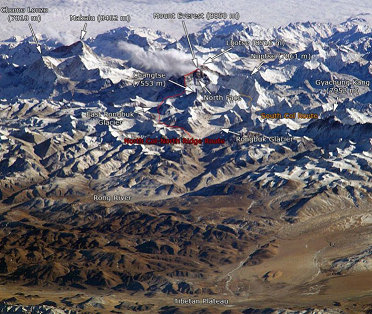 Thirteen thousand feet high on the far side of the Himalaya mountains, we have entered the past and the future at the same time.

We are a medical expedition and also a pilgrimage, consisting of doctors, nurses, Buddhist clerics, supernumeraries like me, and a large staff of guides, muleteers, and camp tenders. We are bound for the isolated villages of Upper Dolpo, a remote region of northwestern Nepal, land of the snow leopard — both the actual animal and The Snow Leopard, Peter Matthiessen’s nonfiction classic. We are traveling the same trails Matthiessen walked in 1973.

As a medical mission, our purpose is to provide primary health care to people who rarely, if ever, see a clinician. As pilgrims, our purposes are as varied as our individual identities. Mine is to make peace with the anger and grief that have dogged me since finishing a pair of books, one on climate change, the other on extinction. They left me heartsick. My delight in the beauty of the world had been joined to sorrow at its destruction, and the two emotions were like cellmates who refused to get along. Their ceaseless argument soured the taste of life. I hoped that a long walk — about 150 miles in this case — might cure the resultant moral ache. (The story of that walk provides the backbone of my new book, The Trail to Kanjiroba: Rediscovering Earth in an Age of Loss.)

The trails we followed led us into the past in the sense that the high Himalayan world — Sanskrit’s “abode of snow” — is a relic of the Pleistocene, a land of glaciers, vast spaces, stony rubble, and frigid rivers. Its cynosure animal is less the snow leopard than the yak, a source of food, fiber, hide, bone tools, transport, and tractor power more essential to the Tibetan settlers of the region than even the bison was to America’s Cheyenne or Sioux. Yaks enabled people to inhabit the wintry attic of the world, where today an Ice Age climate still lingers, even as it begins to fade away.

As much as we were entering the past, however, we were also plunging into the future. Lands at these high elevations appear to be warming two to three times faster than those lower down. The reasons for this are only partly understood. Changes in albedo— the reflectance of the land — are part of the answer: as snow packs shrink and glacial ice retreats, the newly bared and darker earth absorbs more solar energy than the white blanket that had covered it. The absorbed energy, in turn, warms the land and accelerates the melting of yet more nearby snow and ice. Windblown soot and dust, often set loose by human activities, can also darken the white, high-altitude world, yielding a similar effect.

From 1962 to 2006 the glaciers of the Himalaya appear to have lost more than a fifth of their ice. They did not all shrink at the same rate. In fact, some glaciers haven’t shrunk at all, but measurements of the overall trend in the Sikkim-Nepal region put the average loss at seven inches of depth every year across the whole extent of ice. And, of course, the melting continues.

PrevPreviousJamie Lee Curtis opens up about daughter coming out as trans: ‘You still mess up, but I’m learning’.
NextQueer royals can enter same-sex marriage and still ascend to the throne, Sweden says.Next