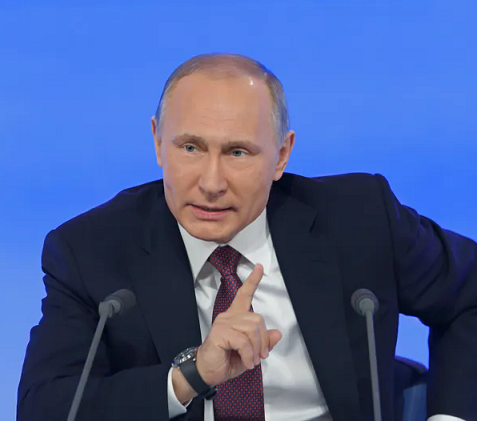 Putin knows a thing or two about crimes against humanity and cancelling others — he’s been doing both for years.

Vladimir Putin, the Russian president who jailed his biggest political opponent and outlawed any public expressions of queerness, recently railed against “cancel culture” and called transgender-inclusive policies a “crime against humanity.”

Putin made his comments during his Thursday speech at the Valdai Discussion Club in Sochi, the site of the 2014 Olympic Winter Games.

During his comments, Putin said Russia should adhere to its own “spiritual values and historical traditions,” while avoiding Western “sociocultural disturbances.”

He said that transgender rights activists are demanding an end to “basic things such as mother, father, family or gender differences.” He also said the notion that children are “taught that a boy can become a girl and vice versa” is “on the verge of a crime against humanity,” The Washington Post reported.

Regarding cancel culture, Putin said Westerners believe “the aggressive deletion of whole pages of their own history, reverse discrimination against the majority in the interests of minorities … constitute movement toward public renewal.”

“It’s their right,” Putin added, “but we are asking them to steer clear of our home. We have a different viewpoint.”

Putin himself has presided over a years-long campaign of hunting, detaining torturing and killing LGBTQ people in the semi-autonomous region of Chechnya. Putin and his administration first pleaded ignorance and then denied the allegations, even though various human rights organizations had documented the testimony of numerous survivors.

Putin also oversaw the passage of a national law forbidding any “propaganda of non-traditional sexual relations.” Its author openly referred to gay people as sodomites and child rapists. The law has since been used to shut down informational LGBTQ websites, fire out queer teachers, suppress pro-LGBTQ protests and chase same-sex couples out of the country.

“Putin’s rhetoric is not dissimilar to those of many right-wing populist leaders in Eastern Europe and the United States, who have targeted sexual minorities in an attempt to shore up support,” the Post noted. His anti-LGBTQ sentiments serve mostly to cement his popularity among “hardcore conservatives and supporters of traditional values,” Tatiana Stanovaya, head of the Moscow-based R.Politik think tank, said.

In short, Putin knows a thing or two about cancelling and crimes against humanity — he’s been doing both for years.