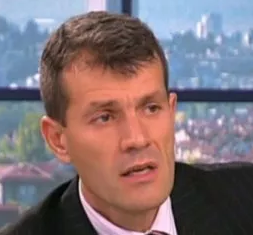 Rasate’s arrest came after it was established that on October 30, together with a group of people, he entered the office of a foundation in Sofia and started shouting, tearing down furniture and spraying the walls. Pre-trial proceedings were instituted for the fact that Rasate, in complicity with other unidentified persons ”has committed obscene acts, grossly violating public order and expressing obvious disrespect for society, characterized by extreme audacity”. The acts described by the prosecuting magistracy coincide with Saturday attack on Rainbow Hub, an LGBTI community centre, by a group of the Bulgarian National Union (BNU), led by BNU leader Rasate. Talking to Nova TV on Monday, Rasate denied any involvement in an attack on an LGBTI office.

On Monday, the Prosecutor General demanded Rasate’s immunity to be lifted, as he enjoys such in his capacity as an independent presidential candidate, nominated by an initiative committee. Later that day, the Central Election Commission (CEC) lifted Rasate’s immunity, allowing Rasate to be prosecuted. On Tuesday, the prosecuting magistracy said that the police has not been able to find him at any of the provided addresses, which led to his arrest.

The prosecuting magistracy will decide on Wednesday or the following days whether to request Rasate to be remanded in custody and on whether to press charges against him. MY