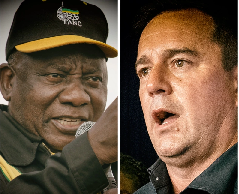 The 1 November 2021 local government elections was one of those moments that define South Africa. Coalitions emerged as a key feature of South Africa’s political setup — as they should, given the proportional representation vote on the back of a clear caution from voters who withheld their votes out of disenchantment and dissatisfaction.

By 8pm on Wednesday night, the number of councils in which no political party had a clear majority had increased to 52, including at least four metros — that’s effectively one in five of South Africa’s 257 municipalities. And it’s almost double the 27 such hung municipalities in the last election of 2016.

“We are moving from dominant political party politics to one of pluralistic politics. We are going to have to think about elections and politics not as a zero-sum game or winner take all, but rather as consensus building,” Apolitical Academy programme director Dr Sithembile Mbete told Daily Maverick.

But, hours earlier on Wednesday, neither the ANC nor the DA seemed attuned to the political moment. Both claimed that strength at the hustings meant the right to lead coalition brokering, after an election marked by an all-time low voter turnout of below 50%.

But, despite the spin, the numbers on Wednesday evening showed the ANC had slipped to 46% polling support — a historic low — and the DA to around 21%, some 3.5 percentage points lower than its 2016 municipal poll showing, alongside reduced seats even in those municipalities it retained.

“The ANC will consider an approach with like-minded parties, including affirming the principle accepted in many countries that the party that received the most votes in a given election be afforded the first opportunity to form a coalition government,” said ANC Deputy Secretary-General Jessie Duarte in a media briefing at the Electoral Commission (IEC) Tshwane national results centre.

Less than two hours earlier, DA leader John Steenhuisen, in a briefing, said that as the strongest party in a council the DA should take the lead in coalition-making.