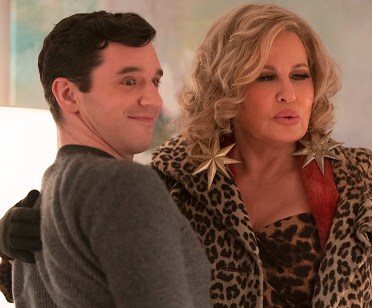 All we want for Christmas is Jennifer Coolidge!

The movie, coming Dec. 2, has a classic Christmas rom-com premise: Peter (Michael Urie) doesn’t want to be judged for being single when he goes back home to his small town for Christmas, so he enlists his best friend, Nick (Philemon Chambers), to pose as his boyfriend. But when Peter’s mother sets him up on a blind date with James (Luke Macfarlane), an awkward romantic triangle ensues.

It looks like a funny holiday romp all around, but many people online are freaking out about one character in particular in the trailer: Aunt Sandy, played by Jennifer Coolidge.

The “White Lotus” star, known for playing spacey characters who deliver brilliant one-liners, appears to be at her comedic best in this latest role.

Drifting through the trailer in a leopard print coat and enormous, star-shaped earrings, she makes a vague reference to the dating app Grindr, and delivers another quip that hints at Coolidge’s real-life status as a gay icon.

“The gays just know how to do stuff,” she muses. “For some reason, they’re always obsessed with me.”

People on Twitter can’t wait to see more of Coolidge in the upcoming holiday movie.

PrevPrevious‘I am against the anti-gay bill and not shy to say so’ – Gabby Otchere-Darko
NextHow did Hollywood pitch movies about gays and lesbians between 1956 and 1977?Next