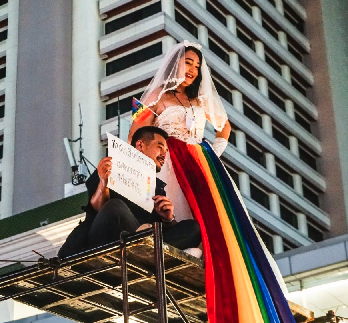 When a large crowd gathered yesterday evening to rally for the right of same-sex couples to marry in Thailand, the authorities tolerated it on one condition: They only block half of Ratchaprasong intersection.

That seeming metaphor for the second-class status Thai society affords LGBTQ+ rights – tolerated but unequal – is what spurred Sunday’s demand for years of broken promises to be made right by fully extending marriage rights.

“Thailand is regarded as a haven for LGBTQ+ people … That’s only half the truth,” Chanun Yodhong, a writer and rep for the opposition Pheu Thai Party, said from the rally stage.

Hundreds were there to hoist rainbow flags and sign a petition calling for legal marriage for all regardless of gender identity and sexual orientation. The rally came two weeks after the Constitution Court rejected a challenge to the constitutional prohibition of same-sex marriage, a legal maneuver meant to get around parliament, where attempts to write it into law have all but died.

As of publication time, there were more than 93,000 signatures on the petition. Organizers said they would deliver it to lawmakers once it reaches 100,000.