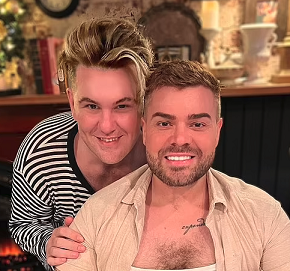 Openly gay entertainment reporter reveals the one question about his relationship he’s tired of being asked: ‘We actually get this a lot’.

Entertainment reporter Justin Hill has revealed one of the most annoying questions people ask gay couples.

The journalist, who has interviewed the likes of Kim Kardashian and Brad Pitt, said during an Instagram Q&A on Tuesday he’s tired of being asked if he’s in an open relationship with his boyfriend.

After inviting his followers to ‘ask me anything’, one curious fan inquired: ‘Are you and your boyfriend in an open relationship?’

‘We actually get this question a lot and I normally ignore it,’ Justin said, hinting he doesn’t like the suggestion gay men are polyamorous by nature.

‘Each to their own but weirdly we are in a very happy monogamous relationship,’ he added.

He concluded by saying open relationships ‘are just not our thing’.

PrevPreviousPardons for historic homosexual offences are welcome – but we still need to address the legacy of criminalisation
NextAndrew Garfield reveals why he returned for Spider-Man: No Way HomeNext