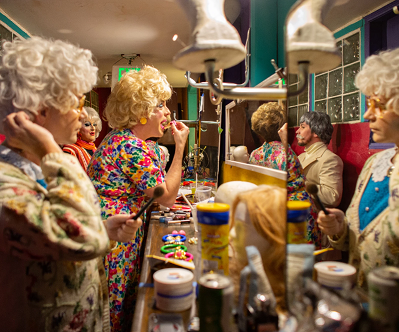 Celebrating Betty White and a lifetime of queer friendship.

Picture it: Silver Lake, 2022. A line of people in N95s and Orville Peck-inspired fringe masks carefully descend a staircase into a basement beneath a hot pink restaurant, greeted by lesbian fan fiction “Golden Girls” art as everyone is escorted to their seats. “Thank You for Being a Friend” plays, and the crowd goes crazy. The stage lights go up with Sherry Vine, Jackie Beat, Sam Pancake and Drew Droege huddled around a kitchen table holding their places with gestures of exaggerated anticipation in full “Golden Girls” drag, making it feel as if somehow we’ve all skipped dimensions and are the live studio audience in an alternative reality version of “The Golden Girls” directed by John Waters.

“Golden Girlz Live” is more than just a drag show tribute to “The Golden Girls.” It was born out of a love for the show and its impact on the queer community, as well as a passion for anti-commercial, queer underground theater and performance art. For drag queen Sherry Vine, “‘The Golden Girls’ will always be [her] Shakespeare.”

Vine and friends and collaborators Beat, Pancake and Droege have been getting together at the Cavern Club — the basement theater of Mexican restaurant Casita Del Campo — since 2014, performing interpretations of classic “Golden Girls” content. This week they return with a brand-new, sold-out show called “Cheesecake and Crème,” with special guest star BenDeLaCrème of RuPaul’s “Drag Race” fame, coinciding with what would have been Betty White’s 100th birthday.

PrevPreviousThe War on Treatment Is Fiercer Now Than Even Covid Itself
NextFederal Shariat Court: ‘Islam guarantees all rights to transgenders’Next