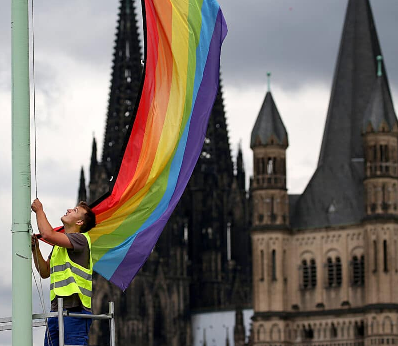 More than 120 German Roman Catholic priests and officials have jointly come out as LGBT+ and called on the church to do better by queer Catholics.

Presenting a fresh test for the church, which has long resisted calls to modernise when it comes to LGBT+ rights, 125 former and current priests, teachers, church administrators and volunteers came out on Sunday (23 January).

In a Change.org petition, the group wrote that while some have “bravely and dared” to come out in the past, others have only “just taken the step”.

“We no longer want to remain silent,” they wrote.

Jointly, the group is demanding that church leadership bring an end to “outdated statements of church doctrine” when it comes to sexuality and gender.

“We want to be able to live and work openly as LGBTIQ+ persons in the church without fear,” the statement read.

The initiative, called Out In Church, posted Sunday evening a lengthy list of demands addressed to the Roman Catholic Church.

LGBT+ Roman Catholics must have access to “all fields of activists and occupation in the Church without discrimination”, they said.

Out In Church also took aim at Church employment rules that consider being openly queer as a “breach of loyalty or a reason for dismissal”.

“Defamatory and outdated statements of church doctrine on sexuality and gender needs to be revised on the basis of theological and human scientific findings,” the officials continued.

“This is of utmost relevance especially in view of worldwide church responsibility for the human rights of LGBTIQ+ persons.”

Among the group’s other calls is a plea for the church to give LGBT+ people of faith access to God’s blessings and sacraments, and to oppose LGBT+ discrimination in all its forms.

Above all, the group urged church leaders to shoulder accountability for the institution historic discrimination of LGBT+ people.

“In dealing with LGBTIQ+ persons, the church has caused much suffering throughout its history,” Out In Church concluded.

“We expect bishops to take responsibility for this on behalf of the church, to address the institutional history of guilt and to advocate for the changes we call for.”

Pope Francis famously replied, “Who am I to judge?” when asked for his thoughts on gay Catholics.