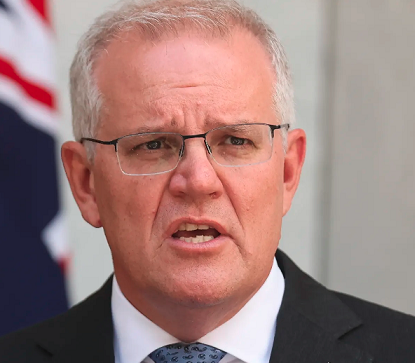 Faith-based schools would not be able to expel gay students, but would retain the right to expel transgender students under draft amendments to a contentious religious discrimination bill package that moderate Liberals say they cannot support.

Prime Minister Scott Morrison may have to rely on Labor to get the changes through the Parliament this week, forcing the Opposition to decide whether to pick a fight on religious freedom months out from an election.

n a bid to appease concerns among moderate Liberal MPs, the government will seek the support of the Coalition party room on Tuesday to strip the right of schools to expel students on the basis of their sexual orientation as part of the religious bills package.

The bill will create a new Religious Discrimination Act, and also amend s38(3) of the Sex Discrimination Act – which would still leave schools with a legal basis to discriminate against students on the basis of gender identity.

Mr Morrison on Monday framed the bill as one that would protect faith communities from religious discrimination, setting up a test for Labor in its heartland seats that have large numbers of people from multicultural or religious communities.

“It’s a bill that means that a Sikh family can go and rent an apartment and not be discriminated against, amongst many other issues, whether in the workplace or in general society and that people can speak their beliefs in this country,” Mr Morrison said.

He confirmed the government would move an amendment to “deal with the problems” in the Sex Discrimination Act, as amended by Labor in 2013, “which meant that you could expel children because of their sexuality”.

But the proposed amendment does not involve the full repeal of Section 38(3) of the Act, which gives religious schools a legal exemption to discriminate against students on the basis of sexual orientation, gender identity, marital or relationship status or pregnancy providing it is done “in good faith in order to avoid injury to the religious susceptibilities of adherents” of the religion.

Liberal sources who spoke on the condition of anonymity confirmed the amendment would move to ban only the expulsion of students because they were gay and would not protect transgender students. But the Australian Law Reform Commission will consider further changes to s38 of the SDA after 12 months, including the broader right to discriminate.

The proposed amendment is a narrower commitment than that suggested by the Prime Minister last week when he first flagged it. Responding to the furore over Brisbane’s Citipointe Christian College, which issued contracts requiring students to agree to specific gender roles and denounce homosexuality or face expulsion, Mr Morrison said last week: “we will have an amendment which will deal with that to ensure that the kids cannot be discriminated against on that basis.”

The amendment is part of a broader package of largely technical changes to the bill, including an amendment to assuage concerns of businesses that will ensure it is not discriminatory for an employer to take reasonable management action in relation to employees.

Tasmanian Liberal MP Bridget Archer has already vowed to cross the floor to oppose the bill because it would override her state’s anti-discrimination laws, while other moderate Liberals have flagged they could not support the bill if it did not do enough to protect LGBTQI students and teachers.

Opposition Leader Anthony Albanese said his position was that people “shouldn’t be discriminated against on the basis of their faith, or their gender, or their sexuality, or their race”.

“But legislation has to be workable. And the test is – can you ensure that you’re supporting non-discrimination without discriminating against another group? That’s the test here that we’ve said all along we would apply. But I do not believe that anyone should be discriminated against on the basis of their faith,” Mr Albanese said in an interview with The Conversation on Monday.

But Labor is still yet to finalise its position on the bill, as shadow attorney-general Mark Dreyfus told caucus meeting on Monday that the final version of the bill was still unknown.

“Once we know what the bill looks like, we’ll go through our processes,” a caucus spokesman said. “We simply agreed that it was premature to finalise our position.”

Attorney-General Michaelia Cash, who discussed the bill with Mr Dreyfus over the weekend, said Labor had been briefed on the legislation.

“We are keeping the faith with voters. If this legislation is not passed, every member of Parliament who voted against it will have to explain to their constituents why they do not back protections for people with religious beliefs,” Senator Cash said.

Christian Schools Australia, one of several Christian lobby groups that threatened to withdraw support for the bill if section 38(3) was scrapped, said it would support the bill if the change to the SDA was limited to gay students.

“Without seeing the detail of the amendment, if they can deal simply with the expulsion of students on the grounds of sexual orientation without unintended consequences, then we’d support it,” policy director Mark Spencer said.

“Dealing with issues of gender identity is far more complex and nuanced for schools.”

Equality Australia, which wants the bill scrapped, said discrimination against any child was wrong, adding that transgender children were at a higher risk of self-harm than almost any other group in the community.

“It’s unacceptable that the government would consider delaying this reform any further and fail to protect such a vulnerable group of young people, who deserve to be safe when they go to school, and respected for who they are,” chief executive Anna Brown said.