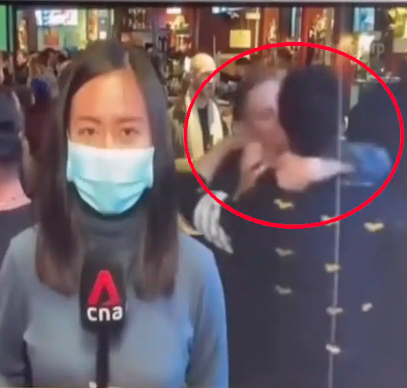 A reporter from Channel News Asia, a 24-hour multinational news channel headquartered in Singapore, was describing the atmosphere at a pub in Beijing when two men entered the frame behind her and began kissing passionately. They then give a knowing smile to the camera and walk off. The men have not been identified, nor their motive.

Singapore is one of 69 countries with laws that criminalize LGBTQ people and their relationships (Section 377A of Singapore’s penal code). Singapore’s censorship law also prohibits “contents which depict or propagate sexual perversions such as homosexuality, lesbianism.”

Channel News Asia edited the kiss out of the clip later posted to its website, but the kiss was shared widely on TikTok. By staging the kiss during a live news broadcast from Beijing, the Singapore population, including LGBTQ Singaporeans, witnessed something to which they are regularly denied access.

“This kiss, while a small action, is a breakthrough for the Singaporean LGBTQ community, who are still criminalized and censored in Singapore,” said Ross Murray, Senior Director of the GLAAD Media Institute. “Let this Olympian kiss be a call to strike down Section 377A of Singapore’s penal code, and end the criminalization of LGBTQ people globally.”
Three men have waged a legal battle to have the law declared unconstitutional, but in 2020, Singapore’s high court dismissed the case.

About GLAAD: GLAAD rewrites the script for LGBTQ acceptance. As a dynamic media force, GLAAD tackles tough issues to shape the narrative and provoke dialogue that leads to cultural change. GLAAD protects all that has been accomplished and creates a world where everyone can live the life they love. For more information, please visit www.glaad.org or connect with GLAAD on Facebook and Twitter.