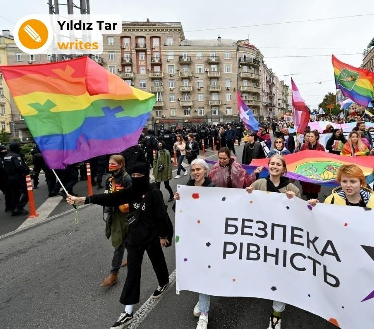 The war of Russia, which carries out a destruction policy against LGBTI+s in its territory, means that this policy prevails in much wider lands.

The world awoke to the occupation of Ukraine by Russia this morning. Although Russia has started a military action towards Donbas region, eastern part of the country, a great number of cities, including Kyiv, were bombed as well. Amnesty International Ukraine affirmed that Kharkov, Mariupol and Zhitomir were also among the cities bombed beside Kyiv.

Although there is no official information about the total number of deaths, considering civilians and soldiers, from the first day of the war which was inaugurated with the proclamation of martial law in Ukraine against the occupation of Russia, it is remarked that hundreds of soldiers and tens of civilians were dead by the information sources in Ukraine.

Russia’s President Vladimir Putin also talked about “traditional values” as well as the expansionist policies of NATO bloc and war policy of USA in the statement he made as a declaration of war:

“Properly speaking, the attempts to use us in their own interests never ceased until quite recently: they sought to destroy our traditional values and force on us their false values that would erode us, our people from within, the attitudes they have been aggressively imposing on their countries, attitudes that are directly leading to degradation and degeneration, because they are contrary to human nature. This is not going to happen. No one has ever succeeded in doing this, nor will they succeed now.”

In order to understand what Putin refers to with the expressions of “traditional values” and “the attitudes they have been aggressively imposing on their countries, attitudes that are directly leading to degradation and degeneration” mentioned in his speech, we have to remember the law “banning gay propaganda” in Russia. Putin has been counting LGBTI+s in the ideologic background of the antagonism between Russia and Europe and USA, for a long period of time. LGBTI+ rights, which has been turned into a political, cultural and social symbol, is not be able to discussed as a matter of universal rights, it is rather argued as an object of culture wars, due to the law “banning gay propaganda”, which was enacted across the country in 2013, shortly before Sochi Olympics in Russia.