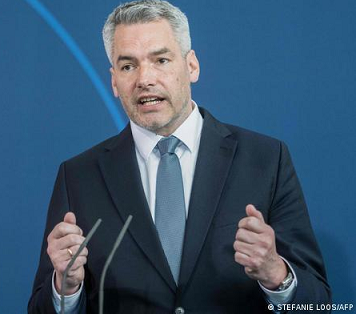 Karl Nehammer is the first European leader to visit Moscow since the conflict in Ukraine began. According to the Kremlin, the two leaders may also discuss issues relating to gas supply.

Austrian Chancellor Karl Nehammer on Monday will become the first European leader to visit Moscow and meet Russian President Vladimir Putin since the invasion of Ukraine began on February 24.

The meeting is intended to tell the Russian president “the truth” about the war, Austrian Foreign Minister Alexander Schallenberg said.

“It makes a difference to be face to face and tell him what the reality is: that this president has de facto lost the war morally,” Schallenberg said upon his arrival for talks with EU counterparts in Luxembourg.

“It should be in his own interest that someone tells him the truth. I think it is important and we owe it to ourselves if we want to save human lives.”

Austria’s foreign minister said Nehammer is taking “very clear messages of a humanitarian and political kind” to the meeting with his opposite number in the Russian capital. The visit is aimed at mitigating “the humanitarian hell” notably by pleading for “humanitarian corridors,” Schallenberg said.

While “this is not an EU-mandated trip,” Nehammer informed key EU leaders of his plan in advance, Schallenberg said.

He added that Nehammer decided to make the trip after meeting Ukrainian President Volodymyr Zelenskyy in Kyiv on Saturday.

PrevPreviousBy not helping Ukraine, you won’t hide from Russian nukes, Zelensky says
Next‘Living in Ireland has changed my life in a way that is so profound’Next