By not helping Ukraine, you won’t hide from Russian nukes, Zelensky says 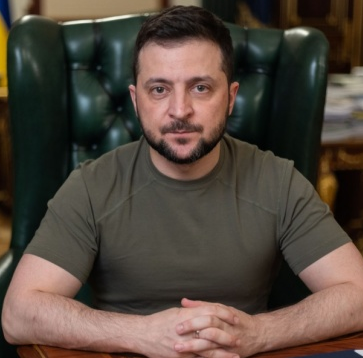 President of Ukraine Volodymyr Zelensky believes that countries that are refusing to help Ukraine in the war with Russia won’t be able to hide from Russia’s nuclear weapons anyway.

He said this in an interview for CBS News’ 60 Minutes, Ukrinform reports.

“The world is saying today that some people are politically hiding behind claims that ‘we cannot stand up for Ukraine because there could be a nuclear war.’ Nobody in the world today can predict what Russia will do, regardless of whether there’s war in Ukraine or not. No one can predict that,” Zelensky said.

According to the Ukrainian president, if Russia succeeds in advancing through Ukraine, “then they will definitely advance throughout Europe, getting stronger and less predictable with every new day.”

“They use any kinds of weapons beyond their territory, so they don’t care if it’s Ukraine or if it’s some other reason… Tomorrow it could be Syria again, or the Caucasus – anything. That’s if they don’t like something or if they see something’s wrong. As their politicians say, their civilization should stretch from Vladivostok to Luxembourg, so no one knows what’s going to happen. I don’t think you can hide behind this, believing that by not helping Ukraine, you will hide from Russian nukes. I don’t believe it,” he stressed.

Zelensky recalled that before the start of the invasion, he had repeatedly appealed to world leaders to impose sanctions on Russia.

“Before the invasion, I asked for sanctions – I asked the United States and the European Union. My attitude was very simple when everyone said that, as soon as Putin takes one step into Ukraine, one step across the border, they will impose sanctions, one shot and they will impose them… And I told them it wouldn’t work, he would take that step, you would impose those sanctions, and what next? The thing is that he will then take his second step, you’ll impose sanctions again, then another step, and then you’ll be out of sanctions. You can’t predict Russia’s actions precisely. You have to be very strong, it’s only force that they understand. That’s why I asked for strong sanctions immediately,” the president said.

He noted that it is impossible to predict where Russia will move in next. “And what will they tell Lithuania? After us, God forbid, if Russia moves further, what will the western nations tell Lithuania? That they shouldn’t defend little Lithuania because tomorrow there could be a nuclear strike. Moreover, I will tell you if Russia moves further, it will say this openly: ‘We are moving into Lithuania, they were part of the Soviet Union, and we are going to Poland because we used to have our troops there before, and if you, the United States or some European nations want to fight for this little Lithuania, we are not sure that we won’t use nuclear weapons.’ What will everyone do, forgive them Lithuania? I don’t know what they will do,” Zelensky said.